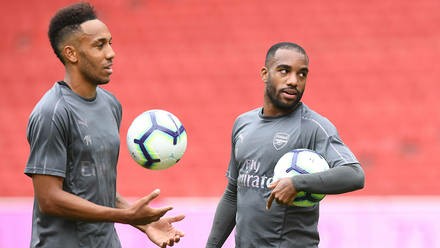 Arsenal has two of the best strikers in Europe but it seems the club has failed to use the talent of the two forwards because one would say that why would a team having both Alexandre Lacazette and Pierre-Emerick Aubameyang be under performing.

Arsene Wenger was under pressure on how he would use them both to bring back success to Arsenal and he did give them chances to play together but he later opted to be playing only one of them, and this decision by him angered the Arsenal fans but it seems Unai Emery also doesn’t want to use them both together because he benched Lacazette last week.

After Arsenal’s loss against Manchester City, Arsenal fans have urged Unai Emery to start the two strikers at the same time when the gunners face Chelsea on Saturday because they believe that the two make a great partnership when they both start a match. Arsenal’s boss Unai Emery was asked whether he would start both Lacazette and Aubameyang against Chelsea, he said via Arsenal.com;

“The possibility to play Aubameyang and Lacazette is okay because we tried that in pre-season and also last year they played together.”

It seems Unai Emery didn’t want to give a direct answer of yes or no but he continued and said that for him, it’s always about  finding the good balance for all that they want in attacking moments and defensive moments but says that he hopes that they both score many goals together or as one.

“I want to look at every player together, how to get Aubameyang and Lacazette scoring more goals whether as one or together.” said Unai Emery.

It has been quite clear that both Arsene Wenger and Unai Emery would choose playing Pierre-Emerick Aubameyang over Alexandre Lacazette if they are to choose one who should start matches but the Gabon international always hopes to play alongside the Frenchman.

Aubameyang even admitted recently that he is ready to move to the wing if that’s the only way for him and Lacazette to play together but we will have to wait what Unai Emery will decide.

Lucas Torreira To Start Against Chelsea