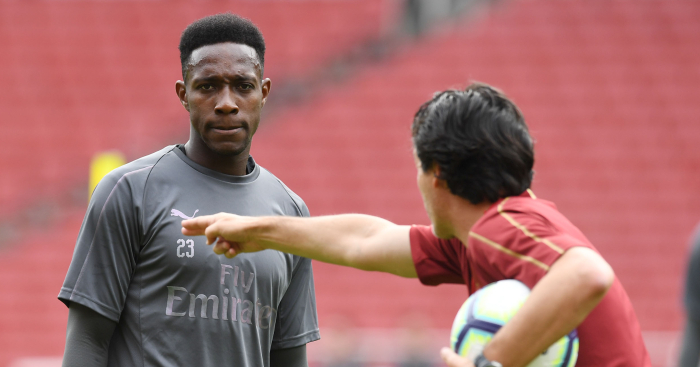 Facing an injury crisis at the left-back position, Emery has been forced to mix things up. The new Arsenal manager has revealed that he’s had to deploy Danny Welbeck on the left side of his defence in training because of injuries to Sead Kolasinac and Nacho Monreal.

Neither Kolasinac nor Monreal featured in the Gunners’ season opener against defending champions Manchester City on Sunday afternoon which ended in a 2-0 loss.

Ainsley Maitland-Niles replaced Kolasinac when the Bosnian full-back came off injured in a pre-season clash with Chelsea two weeks ago and the youngster started against City.

However, he was forced off injured and was replaced by Stephan Lichtsteiner, a right-back.

Welbeck has been showing off his versatility on the training ground and we shouldn’t rule out seeing the England forward utilised at the left-back position at the Emirates.

“Danny Welbeck is one of the players who has a multi-position possibility,” Emery said.

“Right winger, left winger, striker, and also yesterday he worked with us at left-back — his performance was good! I like this spirit. To help positions across the team with positive spirit.”

Welbeck had been linked with a move away from Arsenal this summer and while the deadline for English clubs’ ability to buy players has passed, they are still allowed to sell until the end of the month.

But Emery has insisted that he will not be parting ways with the 27-year-old any time soon.

“I said to him when he arrived with us after the holidays, I want the best performance in his career from this player — and to work for that,” Emery said.

This will be the first time the English international will be playing for Arsenal in that position and it will be interesting to see how he will do in that full back role because it’s not common for a forward to be turned into a position at the back.