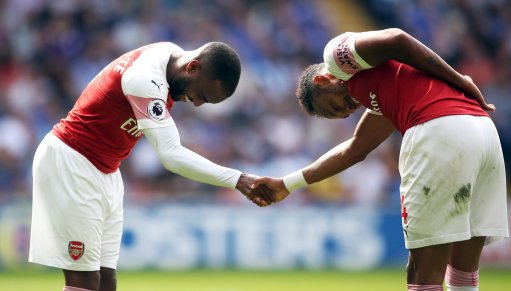 Arsenal fans have cried for the inclusion of both Pierre-Emerick Aubameyang and Alexandre Lacazette into the starting eleven and it seems Unai Emery has finally bought the idea because the two forwards have started together in the last two matches.

Unai Emery first played Lacazette and Aubameyang together in Arsenal’s match against Cardiff City, and they both scored for the gunners. And it seems the Arsenal boss was impressed and then decided to use them once again together when they made a trip to Newcastle United on Saturday but they this time failed to get on the score sheet but Alexandre Lacazette had a far better performance than Pierre-Emerick Aubameyang.

Alexandre Lacazette missed Arsenal’s first three matches because Unai Emery had chosen Aubameyang as his first choice striker but the Frenchman has worked hard to impress the boss in the few minutes he got until he finally got into the starting eleven.

They both have one goal but it’s pretty clear that Alexandre Lacazette has had good performances than the Gabon international, such as today, Lacazette looked to be bossing the Arsenal attack as he tried to make things happen in the Newcastle United box and he even gave Aubameyang a great pass but he surprisingly missed.

Aubameyang can however also say that he isn’t being played in his rightful position hence the poor performances but he did say in the past that he is happy to play on the wing if that’s the only way he can play with Alexandre Lacazette. It seems playing on the wing has turn out to be a big problem for Aubameyang because he prefers playing inside the opponent’s box.

As things stand, Aubameyang will have to play on the wings if he doesn’t want to be on the bench because Alexandre Lacazette has proved that he needs to always be in the starting eleven because he is hardworking.

Analysis On Unai Emery’s Fifth Match Of The Season

How Sokratis Papastathopoulos Has Performed For Arsenal So Far