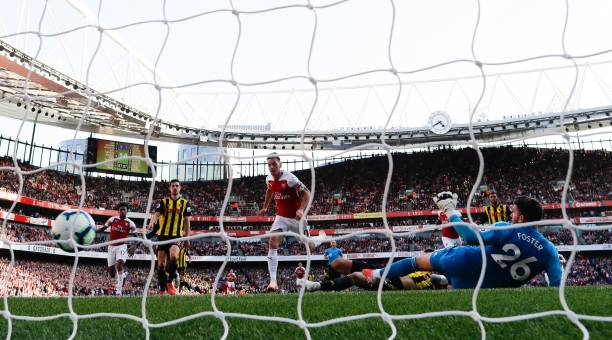 Arsenal has got its seventh win of the season after getting a 2-0 win against Watford thanks to goals from Mesut Ozil and the other an own goal, so this sees the North Londoners climb into the fifth position on the Premier League table.

The gunners came into this match with confidence since they had won their last six matches and they continued their winning streak by getting another win against Watford who were higher than them on the Premier League table.

The first half started off poorly for both teams because they all failed to get on the score sheet yet they had got a number of chances, Arsenal came close to breaking the deadlock in the first half after Lacazette stole the ball from the Watford defender and tried to chip the ball above the goalkeeper but it went wide. Watford also got some chances to score but failed to convert any of them.

As the first half was about to end, Arsenal’s goalkeeper Petr Cech was replaced by Bernd Leno after he sustained an injury. The first half ended 0-0 after the Hornets and gunners failed to get on the score sheet in the first 45 minutes.

The second half started off on a good note for Watford who wanted to control the match and put pressure on Unai Emery’s men who however stayed firm at the back, the Hornets became more fierce in attack and Unai Emery decided to make some changes, and brought in Alex Iwobi (replacing Aaron Ramsey).

Later brought in Danny Welbeck who replaced Aubameyang who seemed not to be having a good day because playing on the wing isn’t the position he prefers.

The gunners got their first goal of the day thanks to a great attacking move which saw Alex Iwobi get some space on the right flank, and sent in a cross which hit the legs of both Alexandre Lacazette and a Watford defender and went into the back of the net. It was counted as an own goal.

The gunners now got their confidence back and started attacking confidently as they looked for their second goal, it didn’t take long to double their lead as Alexandre Lacazette sent a great pass into the Watford box and Mesut Ozil tapped on it, hence going into the back of the net. Unai Emery will be happy with his team because he has now won seven matches in a row.