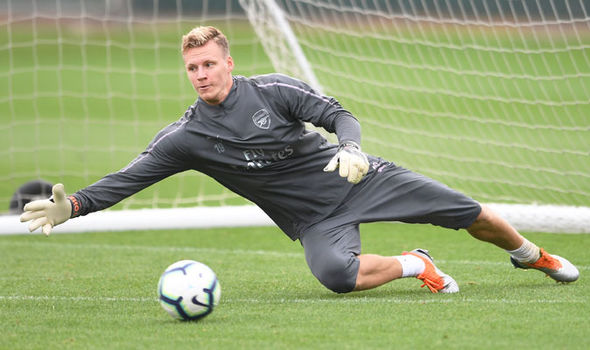 The gunners completed the signing of Bernd Leno in the summer transfer window and the German goalkeeper is expected to be the answer to the goalkeeping problems which Arsenal is currently facing.

Bernd Leno has been at the Emirates Stadium for a few months now but he is yet to have a debut in the Premier League this season because Arsenal manager Unai Emery has said that he chose Petr Cech as his first choice goalkeeper for this season. The Arsenal fans also can’t wait to see him in action because they have watched his video clips of when he was still at Bayer Leverkusen and have liked them. ( his performance in those clips)

Everyone is urging Unai Emery to be selecting Bernd Leno in the starting eleven but Arsenal legend Martin Keown has a different view on this as he openly says that the only thing which the new goalkeeper is good at is playing from the back, other than that, he isn’t that good.

“If you look at the statistics for goalkeepers in Europe, Leno excels in his distribution but is not the best when it comes to the shots he is expected to stop,” said Martin Keown in an interview with Daily Mail.

“The German was not in their World Cup squad and hasn’t been called up for this international break.How good is he? We’re not too sure yet.”

Arsenal’s new goalkeeper Bernd Leno will have a chance this month to prove Martin Keown wrong because he will finally get his debut in either the Carabao Cup or the UEFA Europa League which kicks off in September.

Arsenal has conceded eight goals already this season when Petr Cech is in-goal and the fans believe that this should be enough to show Unai Emery that he needs to give Bernd Leno a trial since he has always talked about rotation of the squads.