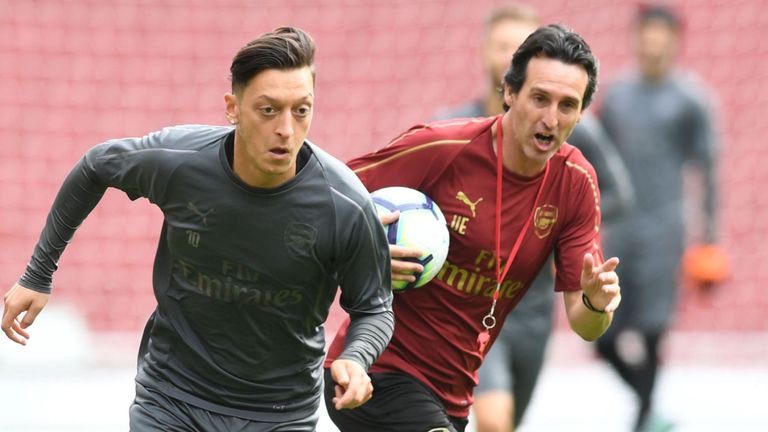 Unai Emery arrived at the Emirates Stadium in May and there has been many reports which claim that Mesut Ozil isn’t getting along with the new Arsenal boss because he wants to try the German playmaker in positions which he isn’t used to.

It’s been weeks since these rumours begun and Unai Emery has continually said that it isn’t true in all of his press conferences he has made over the past few days but everyone was wondering why Mesut Ozil has never made a comment on these matters, hence raising speculations that those reports might be true.

Mesut Ozil has finally made a comment on these rumours after he was asked about his relationship with Unai Emery when the gunners defeated Newcastle United at the St. James’ Park on Saturday.

“I’ve said in the past that I’m very happy to play for Arsenal. The new coach knows what he wants, the team have accepted that and the whole team supports him.” Mesut Ozil told Arsenal.com.

“We have a good relationship with him and you can see that especially today as well. When we score, the whole team is happy, even the players who don’t play so many minutes.”

“You see we are one team that wants to reach our goal. We are happy to take the three points.”

Arsenal fans are pleased to see Mesut Ozil confirm that he didn’t have any argument with the new boss because such kind of scandals in a club usually make a team to perform poorly because there’s no togetherness.

Mesut Ozil had a strong bond with former Arsenal manager Arsene Wenger and there were reports in the summer that the German international regretted signing the new deal yet a man who contributed to much of his wish to stay at the Emirates Stadium had gone but the Arsenal fans will be hoping to see him get along with Unai Emery.

Reiss Nelson Scores On His Debut