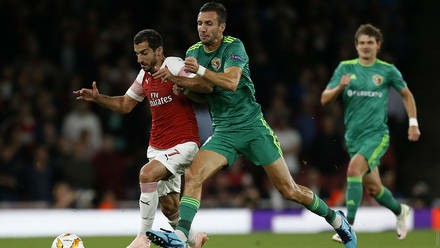 Henrikh Mkhitaryan was selected in the Arsenal lineup that played against Vorskla last night and the Armenian international had an incredible performance against the Ukrainian club.

Mkhitaryan played a huge role in Arsenal’s first goal because he is the one who sent a great pass on the left flank and Alex Iwobi got to it, and then sent a through ball to Pierre-Emerick Aubameyang who scored. The Arsenal fans were happy with the performance of Mkhitaryan because they believe that he has started showing the great partnership he used to do with Aubameyang when they were still at Borussia Dortmund.

Overall, the Arsenal team was at its best on Thursday night until the final minutes of the game where they slipped up and let in two goals hence the gunners not getting their first clean sheet of the season. There were however some positives from their win against Vorskla because they are first on their group E table and it’s four wins in four matches for Unai Emery.

Henrikh Mkhitaryan starting against Vorskla was an opportunity for him to impress Unai Emery because the Arsenal boss has benched him in their last two Premier League matches, and his performance was fantastic because he was at the centre of all attacking moves of the gunners.

Mkhitaryan was happy that they won against Vorskla but admitted that it was tough in the first half, and said that they had more space in the second half.

“It was an important victory and it was a bit tough in the first half but thankfully we scored before we went to the dressing room at the end.” Mkhitaryan told Arsenal.com.

“In the second half it was easier because they started to play football, started to have the ball and started to attack, so we had more spaces in behind their defensive lines. We could have created more chances.”