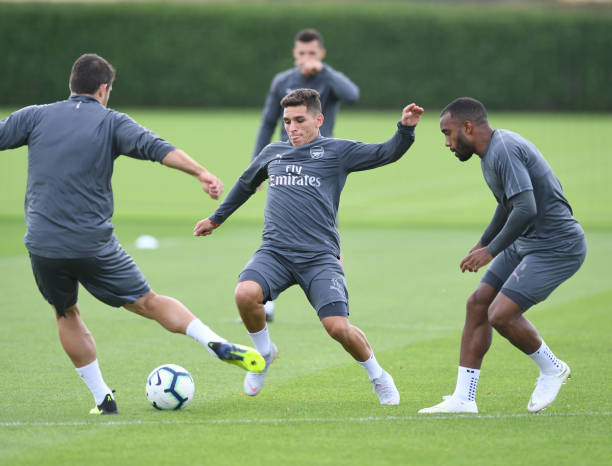 Arsenal signed Lucas Torreira from Sampdoria last summer and the Uruguayan international is considered to be their best signing due to the impressive performances he has had so far this season.

Unai Emery first hesitated at using Lucas Torreira in the Premier League and benched him in their first 5 matches but the midfielder has finally been added into the manager’s first eleven, he was on the starting eleven of Arsenal in the Premier League for the first time when the gunners welcomed Everton at the Emirates Stadium.

Arsenal defender Sokratis Papastathopoulos has praised the former Sampdoria midfielder and says that it is like “Transformers” when he is on the pitch.

“When he is off the pitch, he is so calm but when he is on the pitch, it is like ‘Transformers’, he becomes crazy!” Sokratis told Arsenal Player.

“He works very good, he is small but he is strong enough. I like him very much because he gives everything, he tries to defend every time and when we have players who do this work in front of us, it is very important.”

Sokratis Papastathopoulos also added that their defensive unit has improved and that it is getting better each day. He also said that the whole squad has tactically improved in the last few weeks. This can’t be denied because the North Londoners have won their last six matches and will be looking to make it seven by defeating Everton tomorrow.

Arsenal fans have been happy with the performance of both Sokratis Papastathopoulos and Lucas Torreira because these two have helped to keep the defence of the gunners to be stable in the last five games.

Revealed: When Arsenal Will Know Will Their Next Carabao Cup Opponent