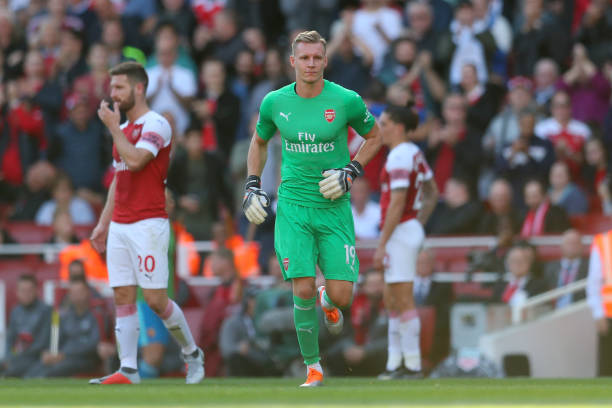 Arsenal played Watford yesterday and won the match 2 nil after it put on a good performance in the second half, Bernd Leno was brought into the match after Petr Cech sustained an injury in the first half.

This was the first time Bernd Leno played in a Premier League match for Arsenal and the German goalkeeper wanted to take this chance to show that he should be Unai Emery’s first choice goalkeeper. He did make some important saves and even looked very comfortable with playing from the back, and that’s what the Arsenal boss wants.

Bernd Leno got his first clean sheet of the season even though he didn’t play the first 40 minutes of the game and Unai Emery was asked on his post-match press conference on what he thought about the performance of the goalkeeper, he said as quoted by Arsenal’s official website.

“He is working very well with the goalkeeping coaches. I’ve spoken with him.” said Unai Emery.

“What’s most important is that when the team needs him, he helps us. He’s prepared and he did that well against Vorskla, on Wednesday and today. It’s the same with Emi Martinez.”

Unai Emery also said that he is happy that Bernd Leno has waited for his chance and he has it now since Petr Cech will be ruled out for some time, the German goalkeeper will be hoping to impress in the matches he plays in the absence of Petr Cech. Emilliano Martinez will also now get a chance to play in the matches of other competitions.

The Arsenal fans have for long been calling on Unai Emery to use Bernd Leno instead of Petr Cech, so they will finally have a chance to see if he is good as they believed because he is going to play in their upcoming matches.

Bernd Leno Reveals What He Likes Most About Arsenal

OFFICIAL: Arsenal Will Face Blackpool In The Carabao Fourth Round