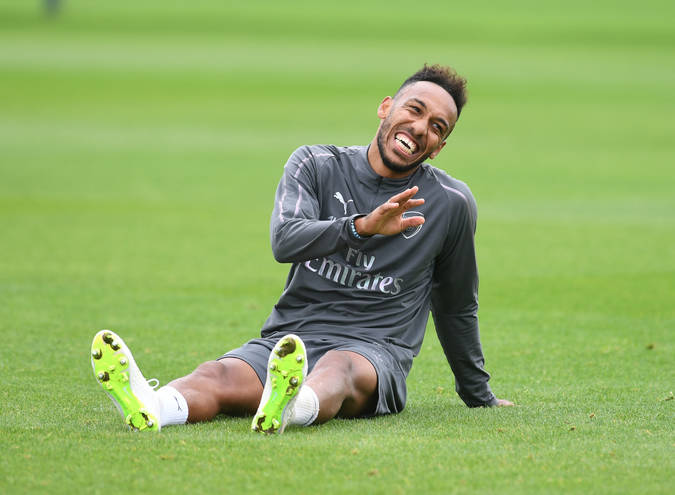 Arsenal will this weekend welcome Everton at the Emirates Stadium and Pierre-Emerick Aubameyang will be hoping to be selected in the starting eleven that faces the Toffees.

Arsenal will come into this match with great confidence after kick starting their UEFA Europa League campaign with a win against Vorskla on Thursday, Aubameyang scored two goals in that match and this makes him Arsenal’s top scorer for now but that might not guarantee him a starting spot in the lineup that faces Everton because Unai Emery has always surprised everyone with his starting elevens.

Arsenal fans expected Unai Emery to use Danny Welbeck in the striking position on Thursday but the boss opted to using Aubameyang and most Arsenal supporters believe that this means that Alexandre Lacazette will start on Sunday since he was benched on Thursday, the gunners boss has said that the Gabon international needs to build his confidence but also says that he is happy with his other attackers.

“We have started playing with our style with Aubameyang, he needs also confidence, but he needs to continue finding his best performance.” The Arsenal boss told Arsenal.com.

“I also have a lot of confidence in Lacazette, but also Welbeck and Nketiah. They are our strikers.”

Unai Emery has used both Alexandre Lacazette and Pierre-Emerick Aubameyang in the starting eleven in Arsenal’s last two Premier League matches, but he has always said that he doesn’t like using two strikers at once because he feels that it makes the team to be un balanced in defensive and attacking moments.

Arsenal fans will be looking to see if Aubameyang’s great performance in the Europa League will be enough to help him make it to the starting eleven on Sunday but what’s certain is that Unai Emery will use him or Lacazette alone in the starting lineup that plays Everton.

Walcott: I Will Celebrate If I Score Against Arsenal

Mkhitaryan Opens Up On The Team’s Performance