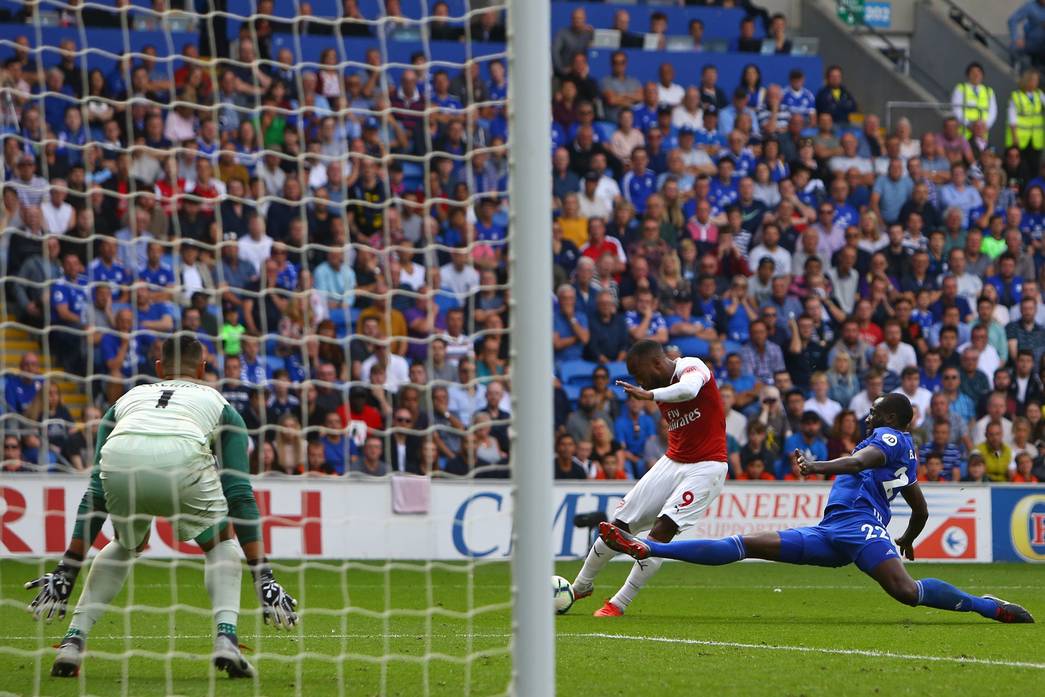 Arsenal’s first away win this season wasn’t that groovy as the “blue birds” from Cardiff gave the Gunners a run for the points.Neil Warnock’s spirited side gave their all as they scored their first two goals this season against an uncoördinated Arsenal defence.

Arsenal again showed their fragility in the heart of defence as they couldn’t keep up with the pressure as they let in 2 goals,making it a total of 8 goals conceded in just 4 matches this season.

For once this season Emery was kind enough to start Lacazette and Aubameyang in the Arsenal line up. Arsenal had most of the possession and they made it count with Mustafi’s thunderous header from Xhaka’s well taken corner but the “Bluebirds had other ideas as they equalised from close range through Camasara. Arsenal returned the favour in the 62nd minute through Aubameyang. Cardiff equalised again to make it a nervy game for the visitors. Lacazette was able to finish off the match with a rocket of a shot after Torreira found the Frenchman in the box, and Lacazette wasted no time in justifying his inclusion in the first XI.

Arsenal’s inability to deal with long balls in the box is fast becoming a constant.Cardiff’s two goals came from set pieces and it is clear that this Arsenal team lacks cohesion defensively. The Xhaka and Guendozi’s pairing is an anomaly, it can never work. Unai Emery must make up his mind about the midfield pairing.It’s either a Xhaka/Torreira combination or a Torreira/Guendozi pairing.

Lacazette and Xhaka Vs Cardiff City

The reason is that Xhaka is not a natural defensive midfielder and would always love to bump forward,slow in pace and prone to mistakes.His mistake led to Cardiff’s second goal.He needs some one reliable behind him to shield the defence.

He is very good at spreading the ball from the centre of the midfield.Same goes for Guendozi, very strong on the ball, has good ability to connect passes and also likes to bump forward.Emery shouldn’t play players with the same abilities at the same time.Arsenal needs an anchor man to shield the defence in the mould of Kante of Chelsea from last season, Torreira fits that bill as he brings that calmness, dynamism and drive to the Arsenal’s midfield.

A more tactically astute team would have punished Arsenal for their complacency in the middle of the pack.Just like the previous matches against Man.City & Chelsea this season.But Unai Emery must make a decision regarding this problem as it mounts much pressure on the defence despite the side’s frailty in dealing with long balls.

Unai Emery gave an insight to his team’s performance in Wales as they try to deal with teams that tend to play long balls in a post match interview, he said He said:

“I enjoy winning, but in the 90 minutes the reaction of the team is very important when we conceded two goals. We controlled the match, not the whole game but maybe 70 per cent of it, with our control of possession and positioning on the pitch.

“But we need to find the best way of dealing with the opposition when they like the long ball and put it in our box, we need to keep working to improve on that.”I’m very satisfied. One goal for Lacazette, one for Aubameyang, but all the players worked with a commitment we want, and I think we are improving.”

Unai Emery also spoke of Cech not comfortable with the ball at his feet as he almost gifted Arter with a goal and the idea of playing from the back.

“Petr has a big personality, he’s got a lot of experience and we want to build him up with this.”We will continue to build with the centre-backs, the midfield, keeping possession of the ball, but he’s very intelligent and knows when you need to play a long ball to get into the attacking areas.”

Emery’s above assertion that Cech should learn how to play from the back might not be entirely right because Cech is not at all comfortable with ball at his feet.The Modern game demands that a goalkeeper must be good with his feet but in recent times we’ve seen goalkeepers commit howlers all in the name of playing from the back the most recent being Allison Becker of Liverpool.

Coaches should understand that goalkeepers trained in the “old fashioned way” would always find it difficult playing from the back except they (coaches) prefer conceding unnecessary goals.This matter of goalkeepers playing with the ball at their feet and building up play from the back will require another article to analyse deeply.

So it’s another 3 points for Unai Emery in the kitty with a 0 goal difference.The coach needs to realise he needs to shore up the midfield and defence so as not to concede more goals.While patience is needed ,time is also of the essence.He needs to plug that ‘hole’, for a side that is vying for UEFA Champion’s league spots this season,they just need to stop conceding needlessly.

Mohammed Elneny Fading At Arsenal And Will Leave In January

Unai Emery’s Next Two Matches, All You Need To Know