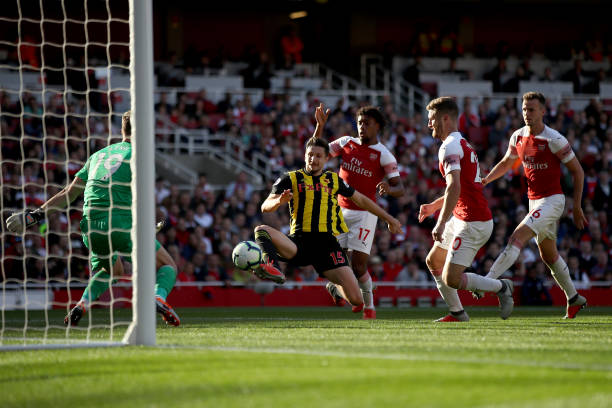 ( Arsenal Vs Watford / Photo via Getty )

Arsenal started this season poorly because it lost its first two matches against Manchester City and Chelsea but those losses were attributed to the poor defence of the gunners because it looked disorganised.

Even though the gunners have won their last nine matches but Unai Emery’s men have not been getting all those wins with clean sheets because the North Londoners always concede unnecessary goals due to poor defending but let’s look at why the Arsenal defence is going to improve in the next few months.

(1) The Return Of The Injured Arsenal Players

The Arsenal injured players have continued their treatment so that they don’t miss many matches this season. Arsenal defensive midfielder Ainsley Maitland-Niles has already returned to full training and this means that he might be available for selection when they face Sporting Lisbon in the Europa League.

November is around the corner and the gunners will be welcoming the one and only Laurent Koscielny back into the Arsenal squad after spending many months on the sidelines. His return will be very important for the gunners because he is a versatile central defender who will strengthen Unai Emery’s back line, he is even Arsenal’s main captain.

Dinos Mavropanos is also expected to return in November and the youngster is a highly rated central defender.

(2) International Break Has Given A Relief To Some Arsenal Players

Most of the Arsenal players like Shkodran Mustafi, Nacho Monreal and many more others weren’t called up by their countries. Even though this could be disappointing to the player but it’s great for the club because they were playing non stop since Arsenal is participating in many competitions this season.

So this break must have refreshed them up so that they could put on a good performance when they play on Monday, that’s if they are in the starting eleven.

Squad depth is very important for a coach if he wants his team to win some major trophies. Arsenal has welcomed back Ainsley Maitland-Niles already so this means the young Englishman will replace the first team player who was to play against Blackpool this month.

Two central defenders, Laurent Koscielny and Dinos Mavropanos will return to the pitch next month and this will help the mostly  used defenders to get some rest in some competitions, hence the gunners having a formidable defence which has great players that play different competitions.

So Arsenal is going to have a strong defence in the upcoming weeks because of the above reasons, you can also tell us your views by commenting.

Analysis: Why Unai Emery Should Use The 4-4-2 Formation Against Leicester

Good And Bad Effects Of Arsenal Vs Leicester City Match