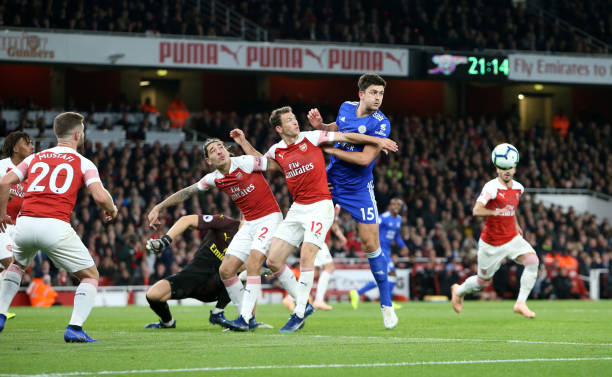 Arsenal recorded their 10th straight win in all competitions a record since October 2007. 7 straight victories in the Premier League and 2 points behind Manchester City at the top of the league.

The Arsenal vs Leicester match was pretty exciting for the Gunners as the Arsenal captain for the night, Mesut Ozil described it as “s*xy football”.

The contest wasn’t without controversy as Rob Holding was adjudged to have put his hand on the ball in his penalty half just moments after he was booked for a yellow card offence.But referee, Chris Kavanagh had other ideas as he waved play on to the dismay of the Leicester players and coach.

Claude Puel, the Leicester coach seemed bemused as he couldn’t fathom why the penalty wasn’t given.He said to SkySports after the match when asked why Jamie Vardy had to leave the pitch in the closing stages of the match. He said:

“Jamie was ill and he could not could not come back in the game and we finished with ten men.I think he felt this in the second half”.

If the penalty was given,it would have changed the complexion of the game.

Arsenal started the match in the now famous 4-2-3-1 formation with the notable absence of Sead Kolasinac and Nacho Monreal which means Stephan Lichtsteiner ( his first start in the Premier League this season) plays at left back.Aubameyang ,Ramsey and Welbeck sits on the bench as Unai Emery rotates his squad due to commitments in the Europa League.

Arsenal as usual had a torrid 30 minutes as their opponents kept asking questions of them and unsurprisingly caved in as Ben Chilwell outpaced Lacazette and beat Bellerin a foot ahead and before the Spaniard could recover the Englishman put a cross in the box but the cross was deflected by Bellerin trying to cut the ball out for a corner but it went into his own net sending the keeper the wrong way.A goal for the visitors deservedly.

Stephan Lichtsteiner had a nightmarish performance at left back as he was cut out many times at the left side.He was a liability at best. Unai Emery commented on his side’s laboured 32 minutes and felt his side needs to improve on this aspect of their game.He said via Arsenal.com

Arsenal got spurred on by the Leicester goal and changed the complexity of the game through their captain on the night,Mesut Ozil who seized the initiative and throttled with the ball at his feet as he slid the ball to Hector Bellerin who didn’t hesitate to return the gesture as Ozil touched the ball into the net coming off the post.A simple but yet a difficult technique.A goal for the home team.He becomes the highest scoring German in the league after scoring 30 goals in the league eclipsing Jurgen Klinsman’s record of 29.

Arsenal got the second half underway and had loads of chances to increase their tally but Henrikh Mkhitaryan couldn’t convert his chances.Leicester almost added a second when Wilfred Ndidi almost got a second but his effort hit the post after a misjudged effort by Leno.

Unai Emery decided it was time for subs as he introduced Guendouzi for the misfiring Mkhitaryan and Aubameyang for the make shift left back,Stephan Lichtsteiner which means Iwobi goes to the right, Guendouzi takes Xhaka’s place and Xhaka goes to the LCB role.A bold move by Emery.

Ozil then swopped a sublime telepathic pass to the running Bellerin on the flank who delightfully crossed the ball into Aubameyang’s path at the other end of the post who couldn’t miss from that spot. 4th assist for Bellerin this season in 9 games just shy of Man.City’s Mendy with 5 assists as he betters his record of 4 assists throughout last term. 2-1 to the Arsenal.

The now unplayable Ozil conjured another masterpiece as he did a beautiful heel flip to Torreira who laid the ball to Bellerin who passed to Ozil but the latter decided to “sell a dummy” and instead the ball finds Lacazette who teed the ball to Ozil in space and Ozil flipped the ball craftily beyond the reach of Kasper Schmeichel to Aubameyang for a simple tap in. 3-1 to the Arsenal.

And from there, it was cruise control for the Gunners as they maintained a 81% possession. It was a wonderful day to be Gunner fan.Three beautiful crafted goals sums up the euphoric atmosphere at the Emirates.On to the “Next Chapter”, as the Gunners begin their Evolution.Next up for the Gunners is a match at Lisbon on Thursday and a London Derby on Sunday.

Should Unai Emery Have Aubameyang And Lacazette Combo Or Competition

Why Second Half Strength Is Good For Arsenal