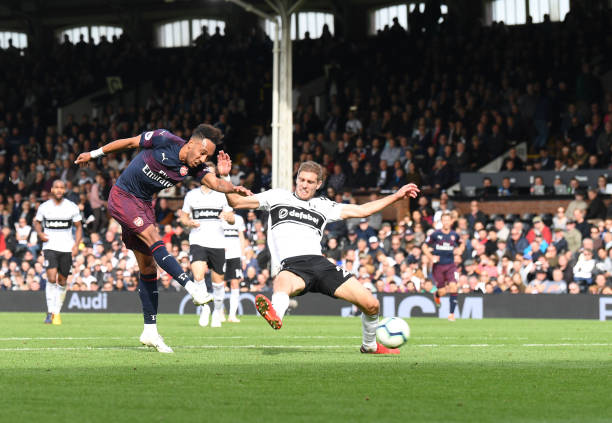 Arsenal striker Pierre-Emerick Aubameyang has been at the Emirates Stadium for a few months but the Gabon international has become one of their best players and the fans love him because of his team spirit which he brings in the squad.

Arsenal boss Unai Emery decided to use one striker today and benched Aubameyang when they made a visit to Fulham on Sunday, the striker was however brought into the match in the second half and he scored two goals in the few minutes he was on the pitch. His performance will probably give Unai Emery second thoughts about benching him in their next Premier League match because he has fully earned his place in the starting eleven.

Pierre-Emerick Aubameyang faced the press after their successful 5-1 win with the Gabon international also scoring double in the second half. He was asked on how he feels about making a difference in their match against Fulham.

“I think we played very well and we knew that Fulham play good football and they play a lot on the counter, but I think the team played well.” Aubameyang is quoted by Arsenal.com.

“I came in and I knew I had to make the difference and I did it, so it’s good!”

Aubameyang will be hoping to get picked up in the starting eleven after the international break because he also made an impact in the second half, everyone got happy to see him do his usual handshake with Alexandre Lacazette after scoring.

Unai Emery might however continue using him as a super sub because Aubameyang always finds it hard to play on the wings because he prefers playing in the centre but he said himself that he wouldn’t have any problem playing on the flank if that’s the only way he can play with Lacazette.

Unai Emery Speaks Out On Winning The Premier League