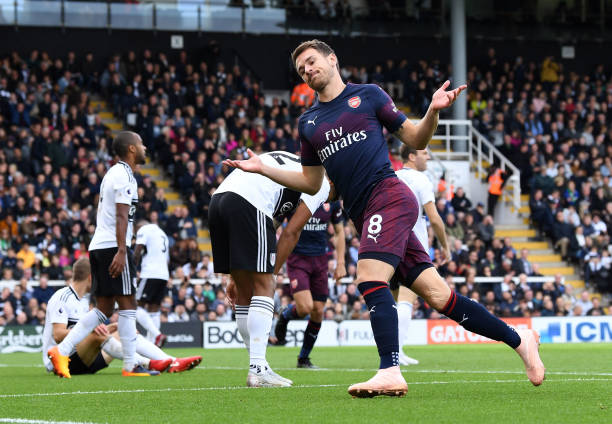 Arsenal fans are worried that their longest-serving player at the Emirates Stadium, Aaron Ramsey will leave the North London club soon since the gunners refused to offer him a new deal unexpectedly.

This year has been hectic to Arsenal as a club because they faced the Sanchez-Ozil transfer saga which saw the gunners give Mesut Ozil a very lucrative deal which has made him their highest paid player. It is reported that Aaron Ramsey also wanted similar wages because he believed that he is at the same level as the German international but Arsenal didn’t buy that idea.

It is claimed that Arsenal with it’s by then Chief Executive Ivan Gazidis was in advanced negotiations with Aaron Ramsey and his representatives but his departure to AC Milan put everything on hold yet the Wales international was about to sign the deal that was put on the table. Some rumours say that the new management of Arsenal that was appointed is the one that withdrew the deal which Aaron Ramsey was about sign.

Aaron Ramsey confirmed himself the reports of the gunners removing the deal from the table but he promised to continue playing his football despite all the transfer speculations that are going on about his future. So it will be interesting to see if the gunners will reconsider renewing his deal if he performs well this season.

Arsenal chief Raul Sanllehi has however hint at why Arsenal has let go of Aaron Ramsey as he was speaking to BBC SPORT. He didn’t want to speak about only the Ramsey issue and made it general as he claimed every decision made at the Emirates Stadium is for the betterment of the North London club.

“I am not here to talk about individual cases but to talk more of the philosophy we are bringing.”

“Any decision that we take is thoroughly discussed, debated among several professional people sharing one common objective, which is what is best for the club?” said Raul Sanllehi.

“Any decision we take along this way, is always going to be based on whether this is good or bad for Arsenal , if it’s a responsible decision or if it can be detrimental for Arsenal, that is basically our main criteria in every step of the decision making.”