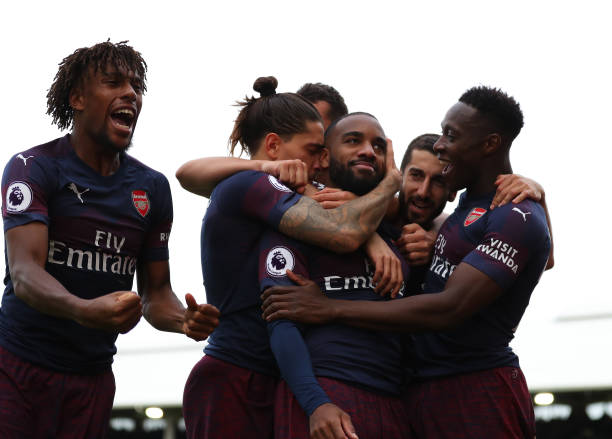 The Gunners went beserk on Sunday as they beat Fulham away at West London with an emphatic away victory. It’s happy days for the North London side as they have got consecutive victories in all competitions.The Arsenal team may not be there yet but you could understand and see the halo as it radiates dimly for now.But thumbs up to the coach for a job well done.Arsenal had barely 64 hours to prepare for this encounter but still had enough fire power to see them through.It goes to show how pragmatic Unai Emery has been since he arrived at Arsenal in the summer.

The training regime ,the attention to details has been sublime.Arsenal would have had it tough if we are to judge last season’s away form.Arsenal has now won the same number of away fixtures this season already. Progress no doubt if you ask me.
Arsenal would have drawn or lost this fixture if it were last season but the mentality in the club has been altered to a “never say die attitude”.

Most Arsenal fans can now start to believe going into the international break,the players need to keep upping the ante to ensure success at the end of the season.Despite the great score line, Arsenal are still not good at their quest to play the ball out from the back.

They lost possession needlessly as they allowed the home team too much space and they paid for it at the stroke of half time as Nacho Monreal’s misplaced pass allowed Christie to lunge the ball to Mitrovic who wasted no time finding Schurrle who ran behind Rob Holding to slot the ball into an empty net beating Bernd Leno at close range.

Arsenal responded with much venom in the second half of the game as they ensured Fulham still retains the term of having the worst defensive record in the league.No thanks to a second Alexandre Lacazette’s goal, contract rebel, Aaron Ramsey and an Aubameyang double .This leaves Fulham at 17th on the Premiership table.

Fulham’s coach,Slavisa Jokanovic complained about his side’s inability to defend and insisted that shoring up the back is the only way to remain in the top flight.Meanwhile, Unai Emery has scoffed off suggestons that his side are major contenders for the title, he said;

“We are happy but also calm because we know it’s difficult each moment and each match,” said Gunners head coach Emery.

“Today we are happy. We are going to continue in our process with this victory.”I think we need to feel together. With the supporters, the club, the players.

“This spirit and mentality is very important for us and then we show our quality together and we can be happy like today.”It’s a process to know each other better after every training and after every match. We are getting better between the players and with the tactics.”

He was also quoted as saying via Skysports:

“I don’t want to look behind me. I think every match is different. In the table, we are little by little giving us a better position for our objective.”When we are winning now match. We do not want to stop thinking or winning. The concentration is one thing we need every time. When in training and in the matches, we need to push a lot.”

This goes to explain that Unai Emery knows that a lot needs to be done before Arsenal can even be considered a title contender this season.As it stands Arsenal are fourth with 18 points, two points behind Manchester City,Chelsea and Liverpool.

According to Opta stats,Arsenal became the first club in Premier League history to have two substitutes,Ramsey & Aubameyang score and make assists in the same match.What a way to go.
Up next for the gunners is Leicester City after the international break.

Will Aaron Ramsey Be Missed By Arsenal?

Report: How Aaron Ramsey Can Save His Arsenal Career