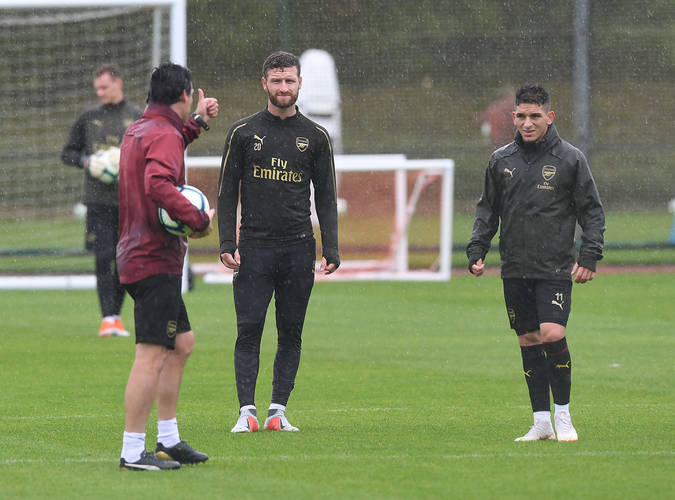 ( Unai Emery and his players in training / Photo via Getty )

This is a game in which 6th placed Arsenal plays 17th placed Fulham will be playing for different reasons. A win for Unai Emery’s men will see them go to 4th place with 18 points. Fulham will look to impress at the Craven Cottage where tickets have reportedly been sold out for the match. Fulham has found life hard in the Premier League as they have only recorded one win.

They are in the 17th position with 5 points after they lost their previous match. They would do anything to get at least a point out of the game against Arsenal because they want to avoid relegation.

Statistics show that Arsenal are better in head to head stats because the Gunners have won more games against the London Club. Nevertheless the game will be highly contested as Fulham feel they can get something from their Capital rivals.

Despite Arsenal coming from playing the Europa league only two days ago and traveling about 4000 kilometers, Unai Emery has said that fatigue should not be an excuse in any outcome of the game. The notable absentees for the Gunners are Petr Cech who is still out for about another 4 weeks, Dinos Mavrapanos and Laurent Koscielny are also out.

A rested Mhkitaryan is likely to feature today in midfield. Aaron Ramsey will be back in the squad, likewise Pierre-Emerick Aubemayang also returns after a short illness which made him miss the match on Thursday.

Fulham will have confidence in playing as they have themselves recruited well over the summer. The likes of Jean Sarri, Andre Schürrle and Luciano Vietto. However their biggest asset will be Aleksandar Mitrovic who has a great scoring record in the past games in the Championship and Premier League. The Fulham Striker will look to test Arsenal’s backline.

We are going to see if Arsenal will record a 9th victory this season, or will Fulham frustrate the efforts of the Gunners. The match promises to be an interesting one.