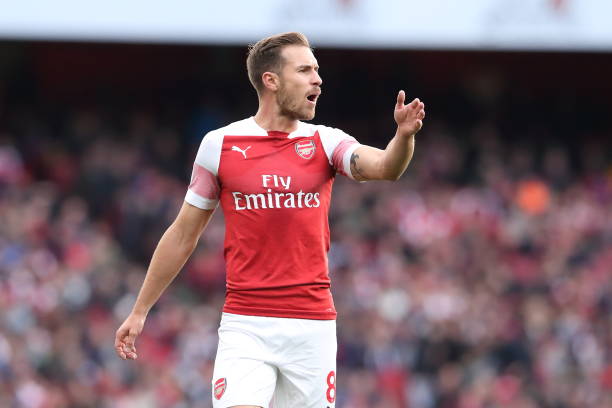 Arsenal midfielder Aaron Ramsey is set to leave the Emirates Stadium at the end of this season because his contract expires next year, so the Welshman is going to attract interest from many major European clubs.

Manchester United has become the latest club to show interest in Aaron Ramsey according to the Evening Standard which claims that the red devils will try to get the Arsenal midfielder in either January or wait until next year where he will join them on a free transfer.

The report claims that Aaron Ramsey doesn’t want to leave England and that he wouldn’t mind joining Arsenal rivals Manchester United who have tried signing him in the last few years. Ramsey is among Unai Emery’s important players because the coach confirmed this himself but him being on the verge of leaving the North London club is really surprising.

Liverpool was at first reported to be the leading contenders to get the signature of Aaron Ramsey because their manager Jurgen Klopp wanted to sign the 27-year-old in the summer but failed after the gunners reportedly said that they won’t listen to any offers for him. But it now seems like Liverpool will have to fight with Manchester United for the signature of Aaron Ramsey.

Arsenal hasn’t made any concrete comment on the future of Aaron Ramsey but Unai Emery has however avoided questions about that topic in his press conferences because he wants to assure everyone that he has no say in this transfer saga. The Arsenal supporters have been happy with how the club has handled the Ramsey transfer saga because they believe that the Welshman shouldn’t demand too much wages yet the club has done much for him.

Aaron Ramsey Could Be Swapped With Manchester United Star