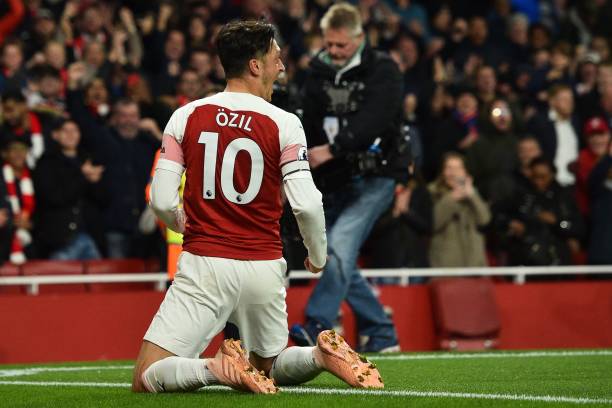 Arsenal midfielder Mesut Ozil had an impressive performance on Monday when the gunners faced Leicester City at the Emirates Stadium. The German international scored Arsenal’s first goal and even assisted Aubameyang who scored the third goal of the gunners.

Arsenal’s encounter with Leicester City was the first match played by the gunners after the international break and Mesut Ozil didn’t only score a beautiful goal but also went into the history books of the English Premier League.

The goal Mesut Ozil scored was his 30th Premier League goal for the gunners and he has now become the all time German player to score many goals in the EPL. He has surpassed Jurgen Klinsmann who held this record for twenty years, it must have definitely been a special night for the Arsenal playmaker.

It is however awkward that Mesut Ozil has made this record when he had retired from international football after he was used as a scape goat by the Germany national football team for their poor performance in the 2018 FIFA WORLD CUP.

It seems Mesut Ozil is going to have a great 2018/19 campaign because he has now scored four goals in all competitions and the Arsenal supporters will be hoping to see similar performances like that shown last night in their future matches.