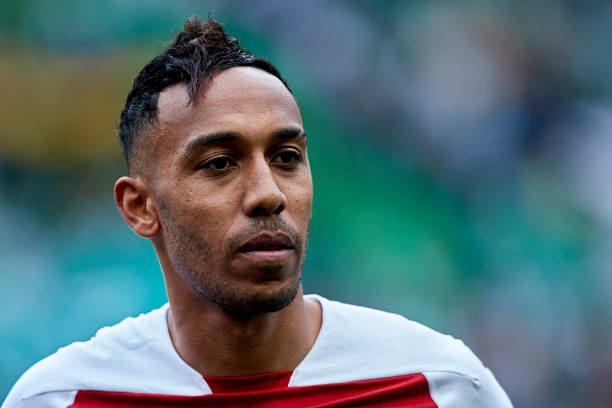 Arsenal travelled to Portugal to face Sporting Lisbon who are their biggest threat in their Europa League group but the gunners managed to get a win even though they were miles away from home but everyone was disappointed with the performance of Pierre-Emerick Aubameyang.

You may be wondering what happened to the super sub who scored a brace against Leicester City on Monday but let’s look at the possible reasons why the Gabon international flopped in Portugal yet he had this time started the game.

I don’t know if everyone has noticed how Aubameyang usually shines for the gunners when the match is very open, as in the players of both sides are able to move the ball freely as they attack each other in search of goals. Like what we saw on Monday when the gunners faced Leicester City, the foxes thought that they had a chance of winning and they then tried attacking but the gunners used counter attacks and scored vital goals.

Aubameyang was however this time facing a defensive Sporting Lisbon who seemed to have been afraid of the gunners and decided to only defend. The striker barely had any touches in the first half because the Arsenal players would lose the ball when near the box of Sporting Lisbon which is full of their players.

Mesut Ozil and Hector Bellerin assisted Aubameyang’s two goals against Leicester City on Monday. They however were benched by Unai Emery this time because the boss wants to always do squad rotation. So Aubameyang had only Mkhitaryan, and maybe Aaron Ramsey to feed him balls but they failed. I can’t put Welbeck on the list of players because he is very similar to Aubameyang and not that assist type of guy, he could take a chance on his own when given an opportunity.

(3) AUBAMEYANG LOVES PLAYING WITH HIS PARTNER

Even though this might seem untrue but it is also a possibility. Aubameyang and Lacazette have shown to have a great relationship with each other on and off the pitch. I can say that Aubameyang would have had a better performance if they were playing with Lacazette because these two always compliment each other when on the pitch. Unai Emery believed that Lacazette needed a rest and he didn’t include him in the starting eleven that played against Sporting Lisbon.

So there you have it, you can also tell us in the comments why Aubameyang flopped against Sporting Lisbon!

Analysis: Should Danny Welbeck Be Used In The Premier League