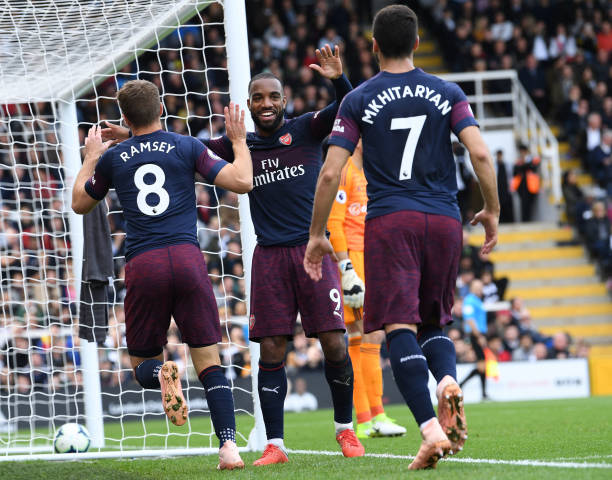 For the first time in many seasons, the Arsenal supporters gave a sign of approval to Unai Emery’s tactics. “We have our old Arsenal back!” The supporters chanted with revived enthusiasm.

Unai has won over the hearts of fans with his new style of football. High pressing, playing from the back and a game that always goes a gear up after halftime. The strikers are on form and scoring at will. That turn by Lacazatte, the way he teed up the ball as it had a slight spin on it and before the keeper could guess it, ‘Lacaboom’ struck like lightning a goal the great Ian Wright can be proud of. Alex is scoring goals of the season week and week out. He is scoring half chances.

To create that space in a full patrolled Eighteen yard area and score makes every fan dare to dream. I thought Fulham would have packed the bus at 1-1 but in the second half they too had belief they could get something from the game.

It was not a good day to be a Fulham keeper, the Lacaboom struck again with ignited confidence out of the eighteen yard area. 1-2 to the Gunners.

Then Ramsey came and scored a goal, a beauty to watch. Game was done and dusted. Aubameyang was a doubt but he came on and showed his class with a brace.

Holding played well, Torreira was excellent and even Bellerin has improved his crossing lately. Iwobi and Mhkitaryan played well in the midfield with the former Manchester United star coming close to scoring when he sent in a powerful shot which went wide. 9 wins in a row, 2 points away from the top, a defense that is improving game after game, a midfield with depth and a striking force to fear. We can dare to dream.

Unai will not be flattered at this point, he made it clear in the press conference that his only goal is to win one game at a time.
The Arsenal faith can’t be denied this joy. We are in bliss.

Arsenal: Matteo Guendouzi Must Be Grateful To Unai Emery

How High Will Arsenal Finish This Season?