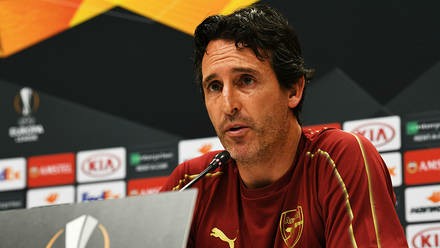 The Arsenal squad has arrived in Azerbaijan ahead of their match against Qarabag which takes place on Thursday, Unai Emery travelled with a senior squad but he revealed some which he left in London.

Henrikh Mkhitaryan is also among the Arsenal players that remained in London but him not travelling with his teammates isn’t a big surprise because of political issues between Azerbaijan and Armenia which is where the Arsenal midfielder is from. Arsenal boss Unai Emery did say in the past that he hoped that Henrikh Mkhitaryan would travel with them to Azerbaijan since sports men can go there even if they have banned Armenians from entering their country.

Unai Emery held a press conference as soon as he arrived in Azerbaijan and here is what he had to say about the players that remained in London.

“I explained first, for Mkhitaryan, why he cannot play tomorrow. Monday and Tuesday, Aubameyang was sick and he cannot travel to play tomorrow.” Unai Emery told Arsenal.com.

“Aaron Ramsey asked me if he can stay in London because his wife is pregnant and they are waiting on the doctors.”

It would have been a different scenario if Aaron Ramsey didn’t give a reason why he wants to remain in London because the Welshman is currently linked with a move away from the North London club after new contract talks broke down.

Pierre-Emerick Aubameyang missing the Qarabag match won’t be a big problem for Unai Emery because the Gabon international would have probably been benched since the Arsenal boss will give chances to players that aren’t getting enough chances this season.