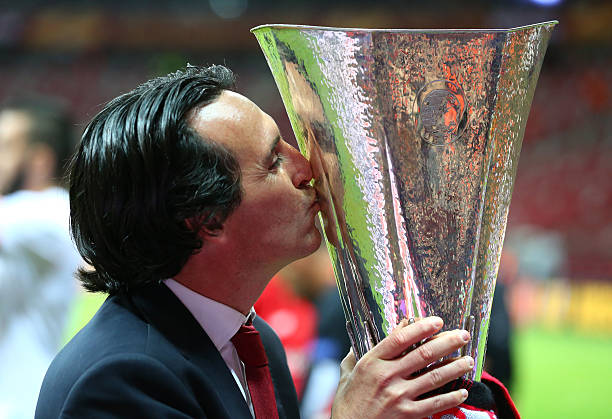 Arsenal is participating in the UEFA Europa League this season and the gunners will be hoping to come out as victors this season after they were knocked out in the semi finals by Atletico Madrid last season.

Arsenal fans in the past used to hate the UEFA Europa League because their then current boss Arsene Wenger used to make sure that his team finishes in the UEFA Champions League spots but things started failing for the Frenchman as he now saw his team even go the Europa last season.

The gunners got drawed an easy Europa League group and the Arsenal team has today travelled to Portugal for their encounter with Sporting Lisbon, they have arrived and Unai Emery faced the press as soon as they arrived and talked on a number of matters including the importance of the UEFA Europa League to the gunners. He says that it is very important because one wins the trophy and even earns free qualification to the UEFA Champions League.

“I grew up a lot individually in this competition. I think this competition is very important because it’s one title and also you go into the Champions League next year.” Unai Emery is quoted by the Mirror.

“For us, for Arsenal and the supporters I am telling them it is very important.”

Arsenal boss Unai Emery has already shown that he values the UEFA Europa League so much because he has used strong squads in their first two UEL games even though it was against weak sides. He has even travelled with a very strong squad to face Sporting Lisbon.

The Arsenal supporters were disappointed with Arsene Wenger last season after the gunners got knocked out when they were just one stage away from reaching UEFA Europa League finals.