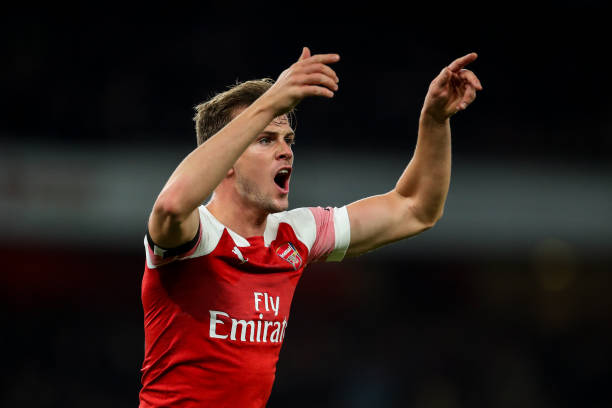 Arsenal has been impressive this season with its new boss, Unai Emery who has managed to get the best out of his players and Rob Holding is among the players that have improved under the guidance of the Spanish coach and his assistants. Holding now has a spot in Unai Emery’s first eleven.

Rob Holding was at first not in Unai Emery’s first eleven but the injury of Sokratis Papastathopoulos forced the manager to try the young defender, and we all must agree that the results have been good because the Englishman has shown that he is ready to be remarkable as Laurent Koscielny who has also just returned from a long-term injury.

Unai Emery has in the last few weeks been pairing Rob Holding and Shkodran Mustafi in the defence but the gunners however played with three at the back on Sunday to accommodate Sokratis, we don’t know if the boss will continue doing that. Holding and Mustafi have played many games together and Arsenal legend Alan Smith believes that, Rob suffers because of playing with Mustafi who is very ‘erratic’.

“I like the look of Rob Holding.He has had a run in the side, which has been vital for his development and confidence.” Alan Smith told Evening Standard.

“It can’t be easy playing alongside Shkodran Mustafi in central defence, because the German is very erratic.”

“And it would be no surprise if Arsenal made it their priority to sign a centre-back sooner rather than late.”

Most Arsenal fans will agree with the legend because they also complain that Shkodran Mustafi is at times careless hence his team getting punished for his mistakes.