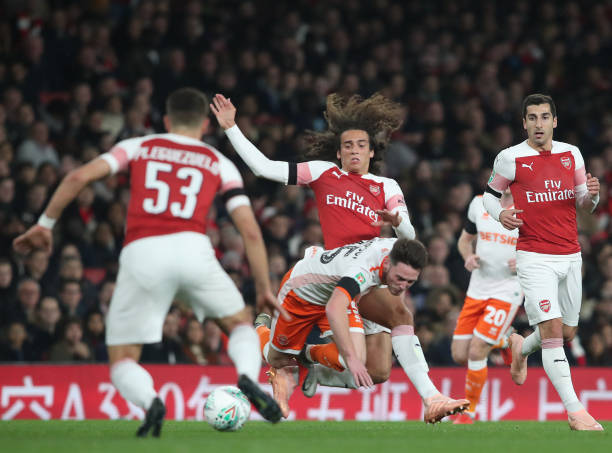 ( Arsenal Vs Blackpool / Photo via Getty )

Arsenal faced League One side Blackpool on Wednesday and they won the match 2-1 thanks to goals from Stephan Lichtsteiner and Emile Smith Rowe. It was a tough match for both sides because they all played with ten men after the referee gave two straight cards to players of each club but not at the same time.

The first half started smoothly for the gunners as they put pressure on Blackpool and had a couple of chances but failed to score. Aaron Ramsey and Danny Welbeck kept pressuring the defence of the visitors but it was still unbreakable because the Seasiders kept most of their players at the back. Arsenal finally got their opening goal of the day after Matteo Guendouzi sent a through pass to Stephan Lichtsteiner who got a touch on it and the ball went into the back of the net giving the gunners the lead. This was the first goal of the Swiss international for the gunners.

The first half ended 1-0 in favour of the gunners thanks to a goal by Stephan Lichtsteiner. The second half started off similarly to the first half as the gunners kept making attacks but it seemed like Blackpool used the same tactic of staying behind as did in the first half, the gunners finally found a loophole in their defence after Welbeck received the ball on the left flank and slide it to Jenkinson who tried sending in a cross but the goalkeeper punched it but luckily it landed on Emile Smith Rowe’s feet who then scored Arsenal’s second goal.

LONDON, ENGLAND – OCTOBER 31: Stephan Lichtsteiner of Arsenal celebrates scoring the opening goal with Danny Welbeck of Arsenal during the Carabao Cup Fourth Round match between Arsenal and Blackpool at Emirates Stadium on October 31, 2018 in London, England. (Photo by Charlotte Wilson/Offside/Getty Images)

The gunners seemed like they were in full control until Matteo Guendouzi made a reckless tackle which earned him a second yellow card hence Arsenal having only 10 men on the pitch, this red card heavily affected them as they were now put on pressure by Blackpool. Unai Emery decided to bring in Lucas Torreira who replaced Maitland-Niles.

Blackpool got a corner and they pulled one goal back after Shkodran Mustafi failed to rise higher than O’connor who scored in a header, Petr Cech had no chance of saving it. The pressure was now real because Arsenal’s chances of qualifying to the next round were now at risk as Blackpool looked for an equaliser and even almost got one after Petr Cech failed to quickly clear a back pass. Unai Emery then brought in Iwobi and Aubameyang who replaced Emile Smith and Welbeck.

Blackpool’s goal scorer O’connor was also shown a straight red card after he fouled Arsenal’s striker Pierre-Emerick Aubameyang. The match ended 2-1 in favour of the gunners and have now qualified to the EFL Cup quarter finals.