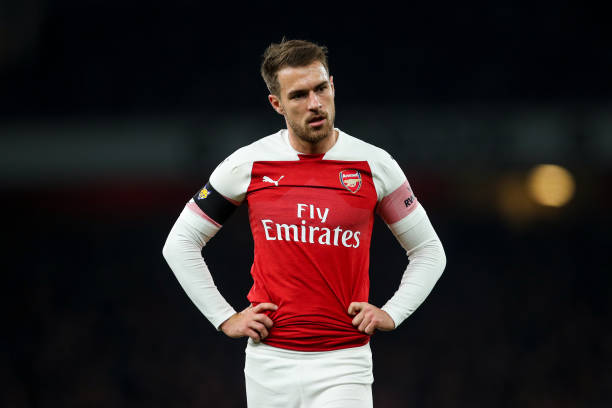 Aaron Ramsey’s current contract at Arsenal will expire at the end of this season after the club reportedly told him that they won’t offer him a new deal for unknown reasons but most reports claim that the North Londoners don’t want to offer him his prefered wages.

Aaron Ramsey was ready to sign a new contract at the beginning of this year but it seems him and his agent tried playing a hard to get game with the club after they saw the gunners offer Mesut Ozil is a lucrative deal to convince him to stay but the change of manager and as well as the departure of former Arsenal Chief Executive Ivan Gazidis affected the negotiations between him and the club.

It has however been reported that Bayern Munich have entered the race for the signature of the Wales international according to the Express which claims that they are monitoring the situation of Aaron Ramsey at the Emirates Stadium. Aaron Ramsey is already linked with a number of clubs like Liverpool and Manchester United who have for long been interested in him but it seems the German champions are now leading the race for the signature of the Arsenal midfielder.

The report also says that Bayern Munich might not even wait for the contract of Aaron Ramsey to end in June next year because they are ready to struck a deal with the gunners in the January transfer window.

Arsenal boss Unai Emery has avoided all questions about the current status of the negotiations between Aaron Ramsey and the club but he recently said that he wants Aaron Ramsey to fully focus on the team for now since they need him. Aaron Ramsey recently issued a statement saying that he needs answers on why the club withdrew the new deal yet he was ready to sign it.