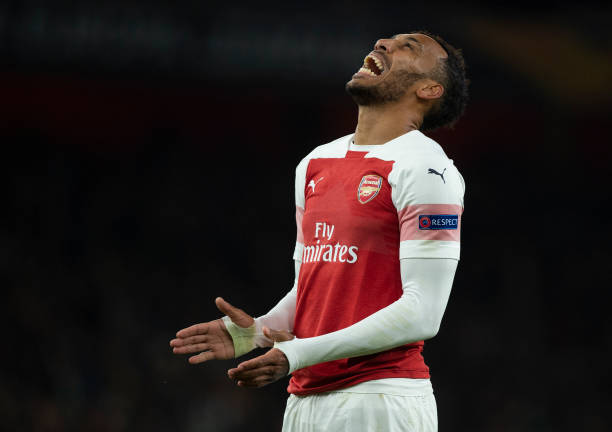 Arsenal welcomed Sporting Lisbon at the Emirates Stadium last night and they made a 0-0 draw even though the North Londoners had got many chances to score but failed. Pierre-Emerick Aubameyang was brought into the match in the first half after Danny Welbeck got injured in the first minutes of the game.

Pierre-Emerick Aubameyang failed to make significant impact in the first half of the game because Sporting Lisbon had a very strong defence that was ready to defend until the last-minute of the game, Arsenal had most of the possession but it failed to send the ball to Aubameyang and when he finally got to it, he was also taking part in the build ups which eventually failed.

To be fair, the match was boring because Arsenal kept most of the possession in both halves but failed to score, they were however close to scoring in the last minutes of the game after Aubameyang got fouled in a dangerous area but the gunners failed to send the ball into the back of the net. Arsenal legend Martin Keown has said that he expected more from Aubameyang on the pitch on Thursday.

“Aubameyang let Arsenal down, He is the closest thing to Thierry Henry since he left that club. He really is that good. And someone should really be in his camp pushing him on.” Martin Keown said at BT Sport.

“Dragging him, drawing a performance out of him. Because he’s a special talent, scores lots of goals and it’s just a hunger. It’s getting to that boiling point and I don’t think he was there tonight.”

Aubameyang is currently Arsenal’s top scorer but he has however failed to score in their last three matches but he is expected to be in the starting eleven of Arsenal that plays on Sunday.

Aaron Ramsey Opens Up On Winning A Premier League Award