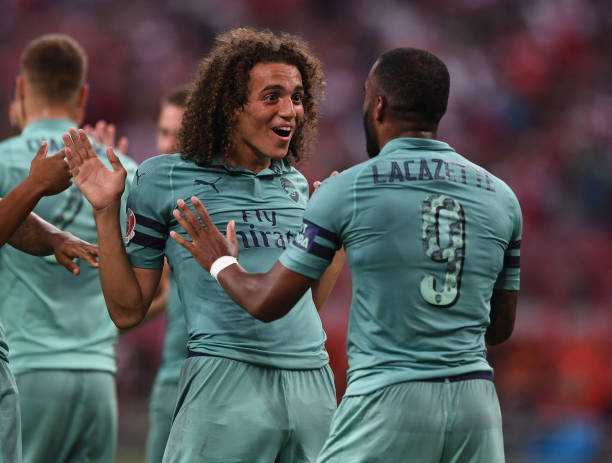 Matteo Guendouzi arrived at the Emirates Stadium in July after the gunners reached an agreement with Lorient. The youngster was among Unai Emery’s first signings at the North London club and his performance on the pitch has shown how the coach and Sven Mislintat were right to bring him at the Emirates Stadium.

Matteo Guendouzi is still 19 years old and this is the first time he is playing at a big club, he has revealed the three Arsenal players that have helped him settle quickly at the Emirates Stadium.

“They gave me advice as soon as I got to Arsenal, in particular Aubameyang,Koscielny and Lacazette. It’s going really well thanks to all of them.” Matteo Guendouzi told Canal+.

Two of these three players are French so it’s no big surprise that they would help their fellow countryman quickly settle at the North London club. Aubameyang is also one of the players that bring togetherness at the club because his teammates say that he is someone who is always happy and that he gets along with everyone.

Arsenal fans were surprised to see Unai Emery use Matteo Guendouzi in their first two matches of the season but the manager has shown that he was right not to send him to the Under-23 squad because the French international has had great performances in the chances he has been given this season.