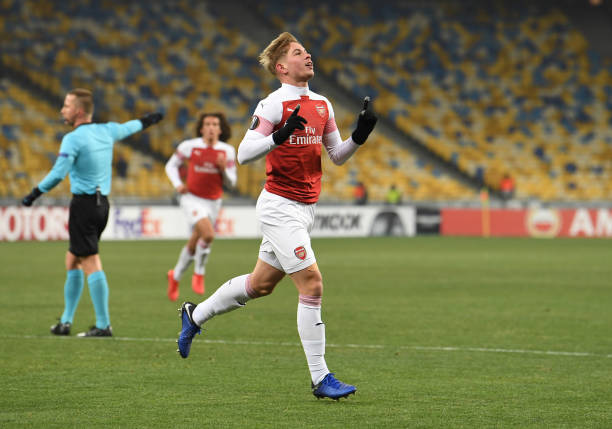 Arsenal is still unbeaten in the UEFA Europa League but what’s more interesting about their match against Vorskla is that they went a weak team whereby, the bench doesn’t have many names that could be brought into the game if the youthful team had failed to impress. So let’s take a look at the five people who impressed the most!

The young midfielder has once again showed that he could be the perfect replacement for Aaron Ramsey whose contract will expire at the end of this season. He scored Arsenal’s first goal of the day after Eddie Nketiah failed to complete his move by shooting the ball into the back of the net, the ball rather moved towards Smith Rowe who made no mistake but put the goal into the back of the net.

He was also very influential in many more attacking moves through out the game and he even got his second goal of the day but it was ruled out by the referee.

Mohamed Elneny was on the sidelines for about two weeks but he recently returned and then received a call up from Egypt. He didn’t play any minute in Arsenal’s game against Bournemouth but he was selected in the starting eleven of the gunners that played Vorskla and he . performance against the Ukrainian side.

He was the starting point of most of Arsenal’s attacks and his interception helped the gunners get a third goal because he is the one who passed the ball to Joe Willock.

Most Arsenal fans might have forgotten that Carl Jenkinson is still their player because he is injury prone and the club hasn’t given him any chances in about two years until this season where he has now made 2 appearances.

Carl Jenkinson is a right back but since Unai Emery didn’t want to travel with another senior defender, the coach then told him to play as a centre back. I have to say, he really nailed that role and we might probably see Unai Emery use him in that position again in the future.

Opinion: Unai Emery should use youngsters against Qarabag