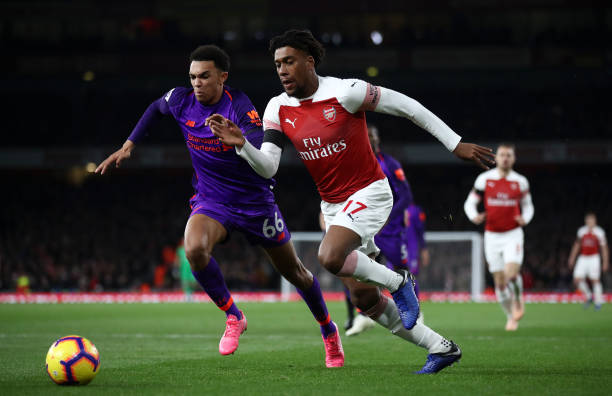 Arsenal faced Liverpool yesterday and they made a 1-1 draw after a late equalizer by Alexandre Lacazette. Most of the Arsenal players were at their best against Liverpool and Alex Iwobi also played a vital role in Arsenal’s quest for an equalizer in the second half of the match.

Arsenal started this match with a lot of attacking quality and Unai Emery thought that he should not include Alex Iwobi in the starting eleven because he wanted to also have a strong attacking line like that of Liverpool. He however brought Alex Iwobi into the game in the second half and the Nigerian international tried to make things work on the flank, the Arsenal fans were happy to see him do his magic on the ball and it seems he is getting good at dribbling each and every day.

Alex Iwobi has got reborn under Unai Emery and the Arsenal fans are surprised that he has been outstanding this season, the Arsenal boss was asked in his post-match press conference on what he had to say on the impact of Alex Iwobi in their match against Liverpool.

“We need every player and the characteristics he has are important. Iwobi can impact highly in the match, also in the beginning of the match when we play with him starting on the bench.” Unai Emery told Arsenal.com.

“He scored against Chelsea, there’s been a lot of matches, I want him to be nearer the box to score more and I think that he can.”

“I think he is very young and he is improving, but I have ambition because he can do more.”

It seems the Arsenal boss is really happy that the Nigerian international is finally showing his full potential and Alex Iwobi did reveal recently that Unai Emery is always encouraging him to do better on the pitch. I think Alex Iwobi has made a great connection with Arsenal’s new manager Unai Emery.