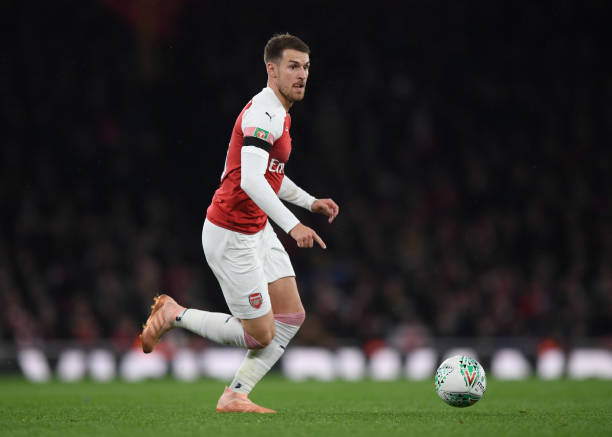 Aaron Ramsey was selected in the starting eleven of Arsenal that faced Blackpool amidst all the transfer rumours about the Wales international. There was a report published yesterday by Sky Sports which said that the midfielder will leave Arsenal at the end of this season since the club has told him personally on why he won’t get a new deal.

Aaron Ramsey played calmly in Arsenal’s attacking line as they took on League One side Blackpool who did give them fight but the gunners still managed to get a 2-1 win. Aaron Ramsey didn’t make much impact in the game but his presence on the pitch was still important because he helped the Arsenal defenders defend their 2-1 lead when the game was about to end, he did have some chances in the first half but it just wasn’t his day.

Arsenal boss Unai Emery had a post-match press conference after their win against Blackpool and he spoke on a number of issues including the behaviour of Aaron Ramsey these days as he is linked with a number of clubs.

“The most important thing for me with Aaron is that I spoke with him last week and his spirit, his quality, his performance and his focus is with us.” Unai Emery told Arsenal.com.

“In training, in matches and again today and also on Sunday when he played 20 minutes at Crystal Palace. He played with this spirit and his focus with us and in training and every match, like today also, he is working very well.”

Arsenal, Unai Emery and Aaron Ramsey have all not told the public on what has really happened in offering the Welshman a new deal but it is believed that the gunners withdrew the new deal because his demands were too high for the North London club.