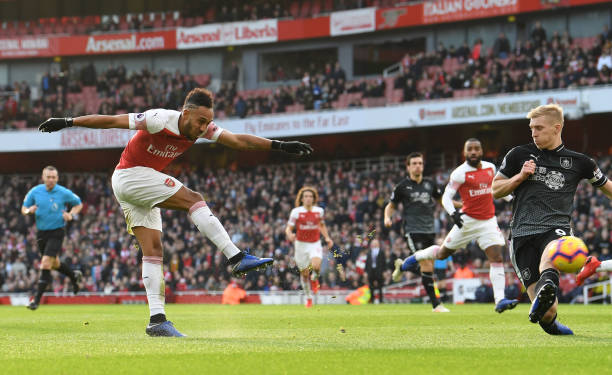 Arsenal played Burnley today and the gunners won the match 3-1 with Aubameyang scoring twice to become the current Premier League top scorer for now. He scored Arsenal’s first goal of the day after he received a great pass from Sead Kolasinac who had received a through ball from Mesut Ozil.

Pierre-Emerick Aubameyang has been blunt in Arsenal’s matches against Southampton and Tottenham Hotspur but the Arsenal fans were happy to see him score twice today because they hugely needed this win after losing two matches in one week.

Christmas is just a few days away and Pierre-Emerick Aubameyang has said that the two goals which he scored against Burnley were his Christmas presents to the Arsenal supporters. The club tweeted the video of him saying this after the match.

"My goals were your present for Christmas… so merry Christmas, and enjoy!" ????

How can you not love @aubameyang7? ???? pic.twitter.com/G0AAoDSo7s

“My goals were your present for Christmas, so merry Christmas, and enjoy!”

The Arsenal fans certainly enjoyed Aubameyang’s performance against Burnley and most of them replied saying that he will win the Premier League golden boot if he keeps up his good form. Arsenal’s next match will be against Brighton & Hove Albion and the gunners will be hoping that he keeps up the performance since they will need his goals if they want to get back to the Premier League top four.