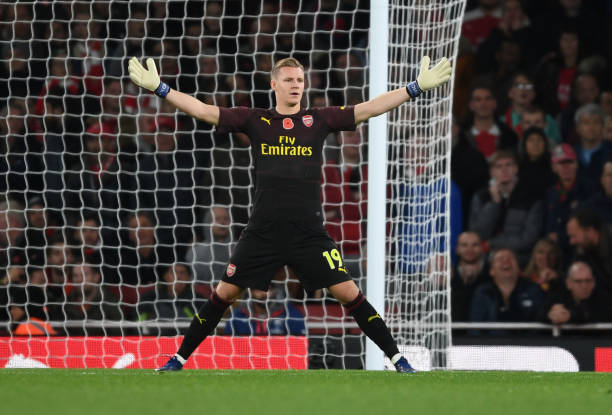 The gunners lost 5-1 to Liverpool at the Anfield Stadium on Saturday and it must have been a devastating moment for Arsenal’s new goalkeeper Bernd Leno because he conceded five goals in a single match for the first time in an Arsenal shirt. Bernd Leno arrived at the Emirates Stadium in July.

Bernd Leno was not Unai Emery’s first choice goalkeeper when the season begun but Petr Cech got injured and the German goalkeeper impressed hence retaining that title. Bernd Leno was in the starting eleven that faced Liverpool yesterday and he conceded five goals, some of the Arsenal fans and football pundits believe that the German conceded many goals because his best performing defenders like Hector Bellerin, Nacho Monreal and Rob Holding were not available.

Most of the Arsenal fans still trust Bernd Leno but they feel that the injuries costed them the game because they conceced embarrassing goals. The Arsenal goalkeeper has said that he doesn’t agree that injuries are why he conceded five goals but rather says that they lost because the whole squad was making many mistakes.

“I don’t think that was the difference today. Of course we conceded five goals but I think we as a team made too many mistakes.” Bernd Leno told Arsenal Player.

“We have enough quality, even when somebody is injured. Today injuries were not the problem.”

So that’s the verdict of Arsenal’s goalkeeper but most of the fans will disagree with him because they want to see new faces at the club because their defence has been leaking a lot of goals in the last few weeks.

Unai Emery reveals who to blame for Arsenal’s defensive problems