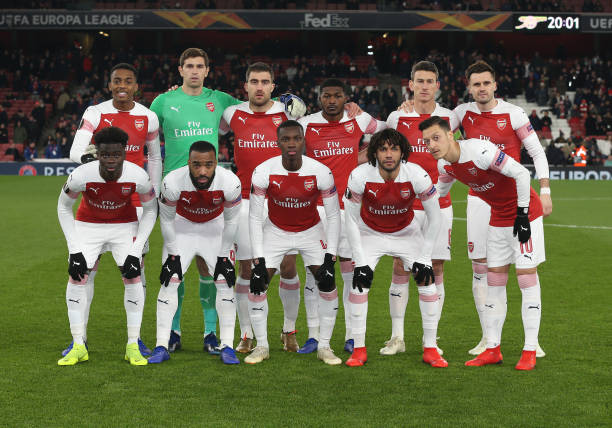 ( Arsenal Vs Qarabag / Photo via Getty )

Arsenal has qualified to the UEFA Europa League round of 32 as group leaders with 16 points. The gunners welcomed Qarabag at the Emirates Stadium on Thursday evening and they won the match 1 nil thanks to an early goal from Alexandre Lacazette.

The gunners came into this match well knowing that this was going to be some sort of test game and Unai Emery then brought in Mesut Ozil and Laurent Koscielny who had spent a long time without playing, they both luckily got our of the game without getting any problems so they will probably be available for the match against Southampton.

Arsenal’s starting eleven had some youngsters like Eddie Nketiah, Saka and Willock, they all impressed in the game even though they were a bit sluggish in the final third. Arsenal’s only goal of the match came after the gunners started an attacking move and Mesut Ozil made a run into the box and passed the ball to Alexandre Lacazette who put the ball into the back of the net.

Most of the Arsenal youngsters in the squad played well but Saka showed that he is a very talented midfielder because he at times dribbled past many opponents and just lacks decision-making and he will be a star in the near future. Eddie Nketiah also worked hard and even scored an outstanding goal but it was unfortunately ruled out for being offside.

The gunners will now wait for the UEFA Europa League round of 32 draw which takes place soon.