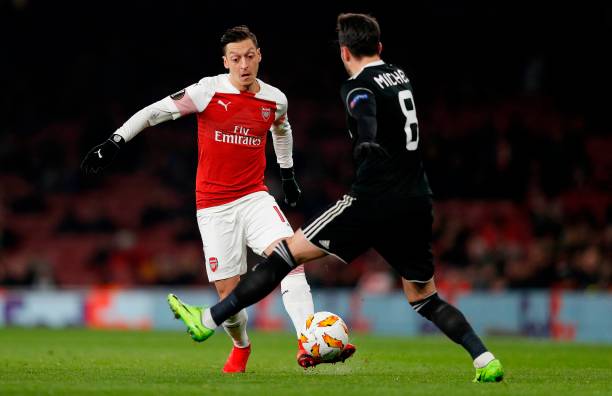 Mesut Ozil has missed Arsenal’s matches against Tottenham Hotspur, Manchester United and the recently played Huddersfield Town game because of back problems but he has finally returned and took part in the 1-0 win against Qarabag. He assisted the goal scored by Alexandre Lacazette.

Mesut Ozil has in the last few weeks been battling with back problems and rumours say that it is because he likes playing fortnite video game. But he was however selected into the starting eleven that faced Qarabag since he has returned to full training and he played almost the full 90 minutes but was replaced in the last minutes of the game.

Arsenal fans must have enjoyed his performance because he was playing for the first time since he got injured and he isn’t used to playing with the youngsters but he however managed to get one assist. The German international was happy about their win against Qarabag and he took to Twitter to comment on the game.

“Simply a good feeling, Back on the pitch & back with a win.”

Most of the Arsenal fans were happy to see him on the pitch and said that they were hoping to see him travel to the St. Mary’s Stadium to face Southampton on Sunday.

Unai Emery reveals why he used Lacazette against Qarabag