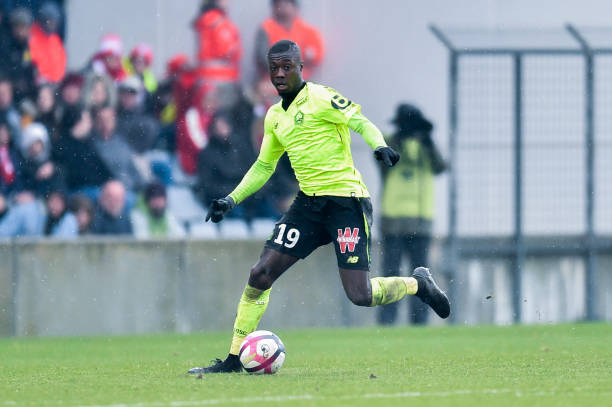 The gunners are currently on the hunt for a winger after the first 20 Premier League games made it obvious that Unai Emery meeds a winger since they already have Lacazette and Aubameyang who have lacked crosses in most matches this season.

The gunners were linked with Nicolas Pepe in the summer transfer window but the Ivorian international never made a move to the Emirates Stadium for unknown reasons but most reports claim that Arsenal had no money to fund the transfer. The gunners have once again been linked with a move for the Lille winger as most reports claim that Unai Emery wants Nicolas Pepe at the Emirates Stadium in this upcoming Winter transfer window.

Lille winger Nicolas Pepe has been impressive in the French Ligue one this season and would be a phenomenal player at Arsenal but unfortunately for the gooners, the player has said that he believes that he will finish this 2018/19 campaign in France amid the interest from Arsenal’s boss Unai Emery.

“To end the season with LOSC, for me that’s for sure. As the president said, I decided to finish the season in Lille and at the end of it, then we will see.” Nicolas Pepe is quoted by the Mirror.

Even though Nicolas Pepe has said that he will finish this season in France but he did give the gunners some hope as he said that he will think about his future when the season ends, so if Unai Emery is interested in him, he might make a move for him in the Summer transfer window.