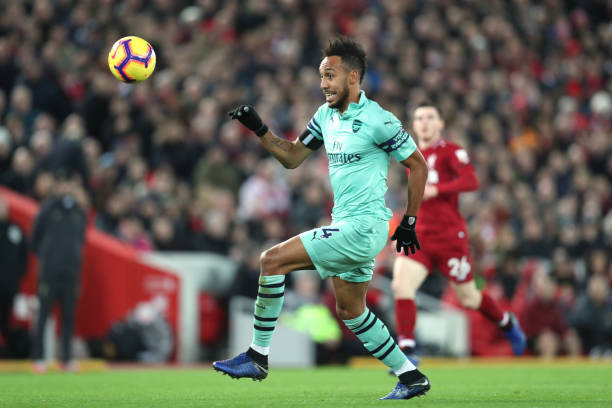 The gunners have lost 5-1 to Liverpool at the Anfield Stadium and it isn’t just a loss that made Arsenal lose three points but it showed that Unai Emery still needs to revamp his squad in the defensive area. Aubameyang was selected in the starting eleven that started the Liverpool game but not even the Gabon international could save the gunners from this inevitable embarrassment.

Pierre-Emerick Aubameyang was just chasing the ball around in the first half because Liverpool had controlled the game and Maitland-Niles was the one to give the gunners an early lead which later turned out to be a forgotten moment of the game because the league leaders came from behind to win the match 5-1.

Arsenal fans were hoping that Pierre-Emerick Aubameyang would do something special but he has however got an embarrassing stat from the game and this some how shows that the claims of him performing well against small teams is true. Here is stat;

“Pierre-Emerick Aubameyang had just 13 touches in Arsenal’s defeat at Anfield; six of which came from kick-offs.”

This is an embarrassing stat because that shows how the Gabon international underperformed against The Reds but the blame can’t be put on him alone because the whole Arsenal squad failed to make any impact during the 90 minutes.

Unai Emery reveals who to blame for Arsenal’s defensive problems