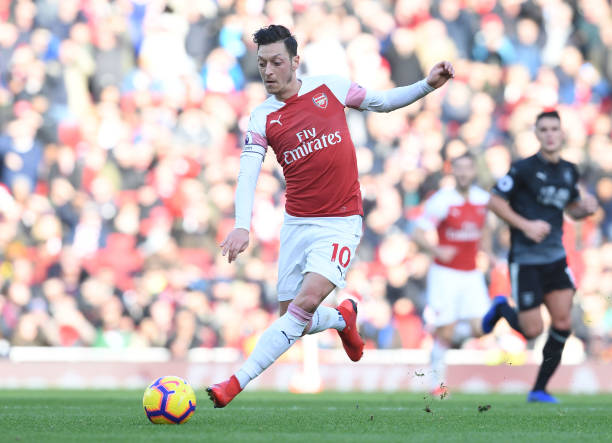 The gunners are back to winning ways today after getting a thrilling win against Burnley thanks to goals from Aubameyang (2) and Alex Iwobi. It has been a special day for the Arsenal fans because they had lost their last two matches so a win was hugely needed in order to stay close to the Premier League top four.

There has been many transfer rumours linking Mesut Ozil away from the Emirates Stadium because of Unai Emery’s decision to leave him out of the squad that played against Tottenham Hotspur on Wednesday this week. Unai Emery included the German international in the starting eleven despite the rumours which claimed that Unai Emery hated him because he is lazy.

Mesut Ozil was also given the captain’s arm band because he is among the five Arsenal players which Unai Emery chose to be the leaders in his squad. Mesut Ozil was very influential in the game against Burnley because he made a key pass which Sead Kolasinac crossed to Aubameyang who opened the scoring for the gunners in the first half.

Mesut Ozil was also involved in the third goal of the gunners as he ran with the ball to the Burnley penalty box and his failed shot landed near Alex Iwobi who scored to make sure that Arsenal collected all the three points. Unai Emery happily faced the media after the match against Burnley and he praised the German international for his great performance.

“Very good response. I think he played like we needed, today. His skills, his commitment with us today was very good and he helped us.” Unai Emery told Arsenal’s official website.

“I spoke yesterday with you in the press conference, we need Mesut Ozil and like today, he was there for us.”

The gunners will now focus on their next match and most of the Arsenal fans will be hoping that Unai Emery includes Mesut Ozil in the starting eleven that plays against Brighton.