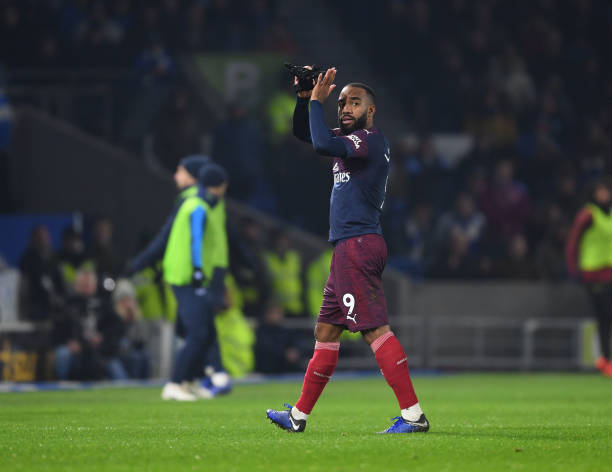 Arsenal made a trip to the Falmers Stadium on Wednesday hoping to close to stay close to the Premier League top four but Brighton & Hove Albion made Unai Emery’s men drop two points. The gunners were happy with the lineup which Unai Emery used because he started both Lacazette and Aubameyang.

Arsenal fans were happy to see Alexandre Lacazette because his reaction after getting subbed off on Saturday against Burnley showed that the Frenchman was frustrated with the decision by Unai Emery to remove him from the game. Alexandre Lacazette played a huge part in Arsenal’s first goal because he controlled the ball in the Brighton box even though he was surrounded by three defenders but he then later passed the ball to Aubameyang who put the ball into the back of the net.

Alexandre Lacazette was substituted by Unai Emery to bring in Aaron Ramsey and the Frenchman looked disappointed once again even though he this time never clearly showed it. Most of the Arsenal fans believe that it was a bad decision by Unai Emery because Aaron Ramsey failed to do his magic against Brighton & Hove Albion, in simple terms, he made no impact in the time he spent on the pitch.

But Unai Emery doesn’t believe that Aaron Ramsey didn’t impress because he claims that the Wales international did well. He said this to justify his decision to sub off Alexandre Lacazette when they were drawing.

“But I think also that Aaron Ramsey deserved to play, he deserved to take responsibility also because he wants to help us. I think Aaron Ramsey played a good match today in this moment.” Unai Emery told Arsenal’s official website.