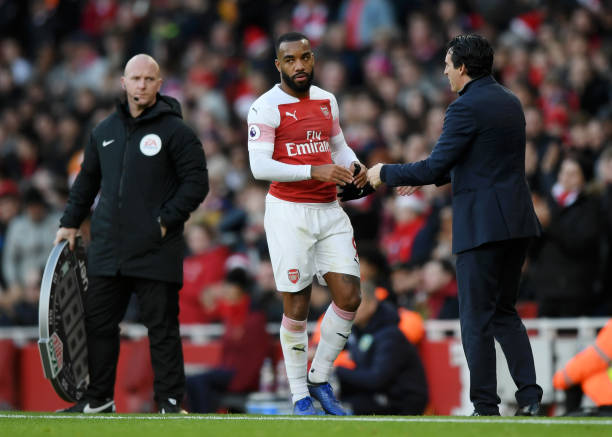 Arsenal defeated Burnley 3-1 yesterday and now have the same points as Chelsea who are fourth on the Premier League table. Arsenal boss Unai Emery added both of his strikers in the starting eleven that faced Burnley and they had a great performance especially Aubameyang who scored twice.

Alexandre Lacazette returned to the starting eleven after having been benched in Arsenal’s last two matches against Southampton and Tottenham, he performed well in the match against Burnley because he even assisted Aubameyang to score the second goal of the gunners. Lacazette was then later subbed off to bring in Iwobi but it seems the Frenchman wasn’t happy about this decision because he was seen waving his arms but it wasn’t clear who he was talking to but it seemed like he was frustrated because he took a long time to sit down.

Fortunately for the gunners, Alex Iwobi who came in for Alexandre Lacazette scored the third goal of the gunners and Unai Emery was in his post-match press conference asked on the behavior shown by, Lacazette and he replied telling Arsenal Player;

“I didn’t see that, but I think he is happy with our victory. Only he wanted to score and when a striker doesn’t score, I like that he can be angry with his situation.” said Unai Emery.

“But he worked very well today. For me, the last matches are the best he has played. He is coming back as the best, Lacazette to help us.”

The gunners will be hoping that it doesn’t turn out to be a big issue because the last thing they would want is a player having issues with the coach.

Aubameyang speaks out on being the current Premier League top scorer