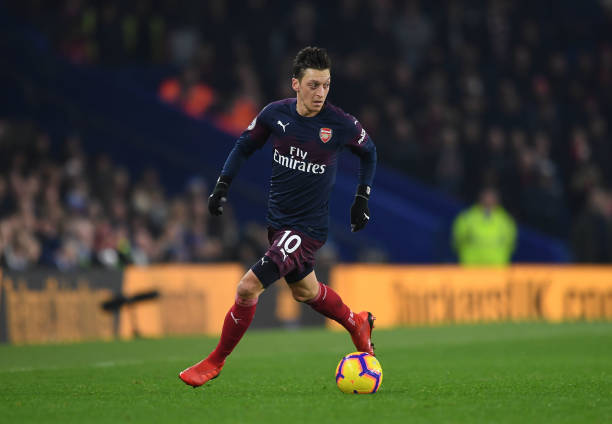 Arsenal might have moved on from pacesetter and club manager Arsene Wenger to the reign of Spanish gaffer Unai Emery but this movement might have prompted major deliberations.

This ranged from the financial to certain tactical discussions within the club hemisphere. One the most likely issue beckons with the status of German playmaker Mesut Ozil at the club.

The creative talent has had a mixed season in terms of performance which has notably drawn criticism for both (right and wrong) reasons. This has seen players like Lucas Torreira and Matteo Guendouzi taking the shy out of the Gunners star in recent weeks.

However, Ozil undoing have been blown out of proportion as some of his teammates have been inconsistent along the first half of the season. The question then is, why throw away the baby with bath water as is the case of Ozil among some of the Arsenal faithful.

The likes of Alex lwobi, Henrikh Mkhitaryan (especially against Liverpool in the 1-1 draw) have faltered in some games so why is the German Number 11 singled out as the major critics.

Ozil have had his up and down at the club and also at international level with series of criticism as regards to his team performance directed (rhetoric) to the player coupled with the recent racist abuse he has gone through.

For me Ozil is Arsenal’s best player (talent) alongside Gabon striker Pierre-Emerick Aubameyang so why pull the trigger against your best leg. Though the aforementioned duo Lucas Torreira and Matteo Guendouzi had put in great shift so far this season notably against Manchester United (Matteo) and Huddersfield (Lucas).

But that is not enough reason some sect at Arsenal should belittle (neglect) Ozil’s massive contribution at the club since joining the London side from Real Madrid in 2013.

Young talents like (Alex) Iwobi and Lucas Torreira still need a blend of Ozil’s experience to grow at the club. Arsenal on the other hand must explore the quality he brings to the table by placing the right players (combo) around him to flourish.

His reputation on the pitch also counts as Arsenal needs to match their rival in big games (respect factor) and in club ranking.  Ozil has weighed in more assists than most Premier League players of high repute so there  (balance) proper assessment of the scenario before we act as a judge in the German’s dilemma.

I am pleased to know that Unai Emery (who is still in evaluation his options) understands Ozil situation and at least had to be patient till (the player comes good) especially on the defensive aspect of his game.

All said and done, there is need for Arsenal to know the basics which is that Ozil is Arsenal’s best on his day and any other variables must be put in place to ensure he returns to his best and in the first team (line-up) much to the benefit of Arsenal Football Club as a whole.

Can Arsenal really finish above Manchester United In the Premier League this season?

Report: One mistake that Bernd Leno has been doing this season