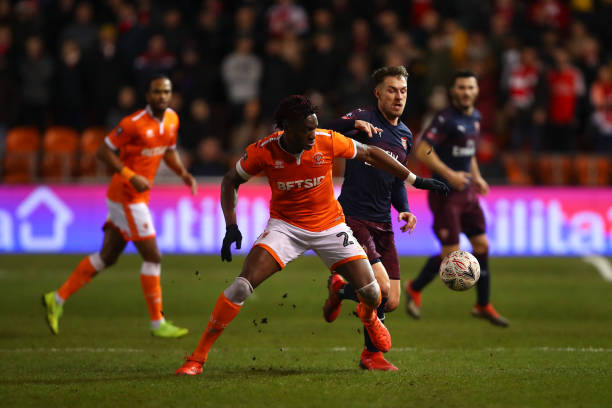 ( Blackpool Vs Arsenal / Photo via Getty )

Arsenal defeated Blackpool 3-0 on Saturday evening at the Bloomfield Road Stadium thanks to goals from Alex Iwobi and Joe Willock who surprisingly scored a brace. The gunners won the match convincingly and this could be because their opponents were weak.

The whole Arsenal team put on a good performance like Aaron Ramsey who started as a central midfielder and got paired with Mohamed Elneny who also put on another good performance. The Welshman despite being on the verge of leaving the club, he is still giving his all for the North London club and had a great performance against Blackpool.

He was about to score in the second half but his shot was stopped by the goalkeeper and it found Iwobi who scored hence the gunners winning the match 0-3.

The midfielder took to Twitter to send a message to the fans.

Well done boys ???????? in the hat for the next round #EmiratesFACup pic.twitter.com/0JnmjHFcUM

“Well done boys, in the hat for the next round #EmiratesFACup”

Unai Emery started Sead Kolasinac as a left back and he was pretty poor at defending but in terms of going forward, he proved why he is called a beast by the Arsenal fans. He had a great performance especially in the attacking moments but struggled at defending but Arsenal luckily never conceded. He also sent a message to the fans after win against Blackpool.

“Next round in the Emirates FA Cup! #AFC #FACup #EmiratesFACup #SeoKol”

Stephan Lichtsteiner was going to play as a right back in the Blackpool match but he was however changed into a centre back after Unai Emery brought in Jenkinson after Laurent Koscielny got injured in pre kick off training. The Swiss international had little work to do in the Blackpool match but he got the job done when his services were needed. He too sent a message to the fans;

3:0 against Blackpool! Let's go for the next round! Come on @Arsenal ! ???????? #WeAreTheArsenal #COYG #YaGunnersYa pic.twitter.com/yx1NneNYpX

“3:0 against Blackpool! Let’s go for the next round! Come on Arsenal ! #WeAreTheArsenal #COYG #YaGunnersYa”