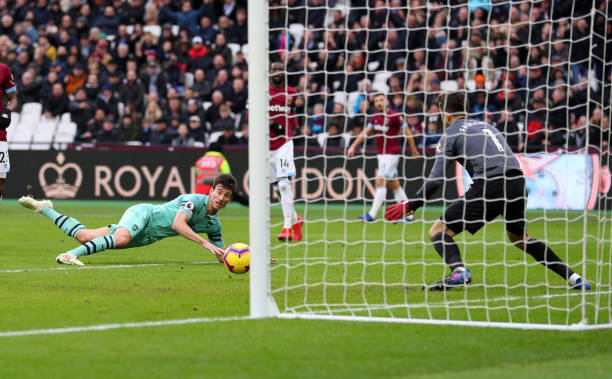 Arsenal lies 5th on the Premier League table following their 1-0 defeat against Manuel Pellegrini’s side. This got Arsenal tied (level) on 41 points with Manchester United at the moment.

The defeat has given the Red Devils much leverage to find their footing along in this season despite their poor showing especially at home (Old Trafford).

However, Arsenal will still be happy that they are still on top of United irrespective of the mathematical negligence that exists between both heavyweights (Arsenal and Manchester United).

There is no doubt Arsenal got quality in their starting eleven especially in the attacking set-up but the lack of attacking affinity in Unai Emery’s side cost the Gunners the win.

Despite the talent of the attacking three against West Ham United (Alex Iwobi, Pierre-Emerick Aubameyang and Alexandra Lacazette) Arsenal were stuck in attempt to find the breakthrough goal.

The likes of Iwobi and Aubameyang brings an attacking imbalance that got Arsenal shadow boxing at some points in the London derby.

Arsenal must hope Henrikh Mkhitaryan is always fit or the club should better sign a pure winger that could be befitting for Alexandre Lacazette unlike the mismatch that Iwobi and Aubameyang brings (with their limitations) irrespective of their talent on the pitch.

The Gunners are known for their weak approach when it comes to 50-50 situation. They always want to make it look soft most at times while it just continues to backfire on them.

When will Arsenal learn to contend for 50-50 battles aerial or on the turf as those rash (with intelligence) challenges and positive tackles helps to promote your chances in recovering the ball in order to initiate an attacking move down the opposition area.

Coming into the game, it was somehow felt Nasri would have an impact against his former club Arsenal.

The French star was impressive as his passes and movement on the ball opened spaces down the Arsenal area.

His calmness and aerial awareness was spot on as he made Arsenal pay for letting him go in the first place.

Alexandre Lacazette Vs Anthony Martial; Who Can Influence the Arsenal/United game more?

Report: Why Unai Emery starts Matteo Guendouzi in most matches