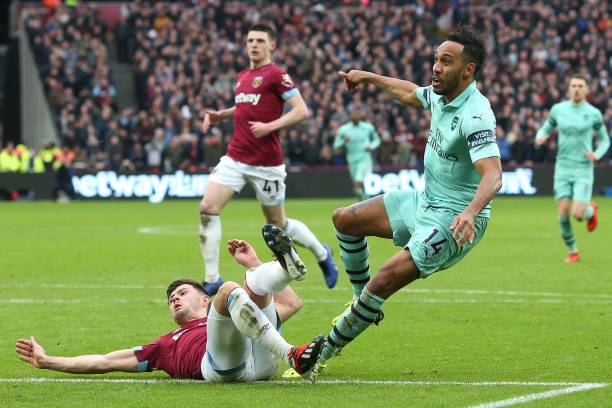 West Ham United defeated Arsenal 1-0 at home as the Gunners found it hard to get beyond the hosts’ goal.

The Gunners started out with the attacking trio of Nigeria’s Alex Iwobi and the strike pair of Alexandre Lacazette and top scorer Pierre-Emerick Aubameyang but all of them fired blank in the wake of Arsenal’s defeat.

This piles more pressure on manager Unai Emery and his side as inconsistency continues to blight Arsenal’s season.

However with the defeat (1-0) to host West Ham United, we evaluate the statistics (match inference) as regards to the game.

Arsenal’s prolificacy in front of goal was made evident here as West Ham claimed the vital three points in the London Derby.

Despite good work from Lacazette the French forward failed to beat the West Ham goalie under pressure in the opposition area as Unai Emery and his Emirates guns walks a tight rope at the moment on the Premier League table.

Both sides missed a series of chances in the attempt to upstage each other in the derby but it was West Ham that did the needful to prevail on the occasion.

Lacazette looped the ball over the bar when he should have hit the target or rather squared the ball to his teammate as they suffered another defeat along in the season.

Arsenal as expected dominated possession in midfield but in efficiency (attacking wise) let them down in the game.

This was seen as Matteo Guendouzi and Granit Xhaka controlled the rhythm for Arsenal despite the impressive performance of former Arsenal star in the names of Samir Nasri.

West Ham’s attacking fuel was terrific for Arsenal to deal with in the London derby.

This wearied and teared the Arsenal’s defence as Maitland-Niles and Shkrodan Mustafi conceded corner-kicks for Arsenal. Nasri’s influence was felt as Arsenal was bridged from similar scenario in the 48th minute.

The match recorded total of 8 (5+3) offside counts as both teams sought for the breakthrough goal.

However, patience and match resilience paid off for the home side as Declan rice scored to win it for West Ham four minutes after the restart.

The London duel is known for its physical enumerations coupled with the frenetic atmosphere as the fans get behind their team for the best possible outcome in the derby.

This was seen as Arsenal committed 10 fouls, three (3) more than West Ham as Pellegrine and his side recorded just 7 fouls in the entire 90 minutes contest.

Mesut Ozil speaks out ahead of Chelsea match