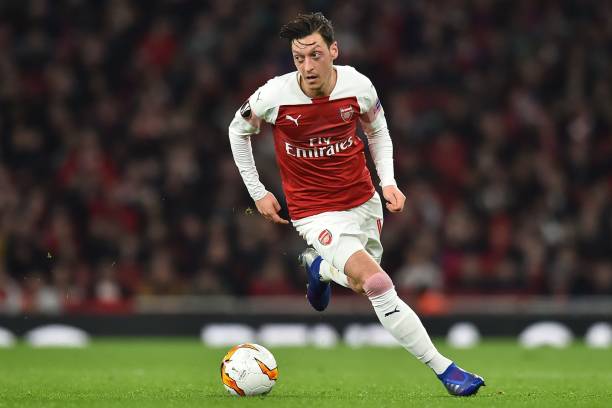 Arsenal midfielder Mesut Ozil returned to the starting eleven on Thursday when the gunners welcomed Bate Borisov at the Emirates Stadium and the fans were happy that Unai Emery finally gave the German international a chance to showcase his talent on the pitch.

The Arsenal supporters were happy to see Mesut Ozil start because there are many rumours which claim that the boss doesn’t like him because he is supposedly lazy. The fans were happy with the performance of Mesut Ozil on Thursday but here are reasons why he won’t start the match vs Southampton on Sunday.

1. THE RETURN OF ALEXANDRE LACAZETTE

Alexandre Lacazette did not participate in Arsenal’s Europa League round of 32 second leg vs Bate Borisov because he received a red card in Belarus. That red card doesn’t affect domestic matches so the Frenchman will of course be in the squad that faces Southampton.

When the season begun, Arsenal’s boss Unai Emery was not interested in using two strikers but he has in the last few weeks bought the idea of starting both Aubameyang and Lacazette. So if the gunners are to use two strikers then the gunners won’t use the 4-2-3-1 formation which is the only formation where Mesut Ozil flourishes in perfectly.

2. SOKRATIS COULD MAKE UNAI EMERY CONSIDER A BACK THREE

Sokratis Papastathopoulos has returned after having been on the sidelines for about four weeks. Aside from scoring a goal on Sunday, he looked sharp and ready to get back into the starting eleven. Arsenal has already confirmed that Koscielny’s injury was minor so he could possibly be available for tomorrow’s game.

So Arsenal has three fit centre backs and Unai Emery likes a three-man defence system so this would possibly see Mesut Ozil benched because it is hard to use him in a 3-4-3 formation.

Report: Why Unai Emery hasn’t given Denis Suarez a start yet