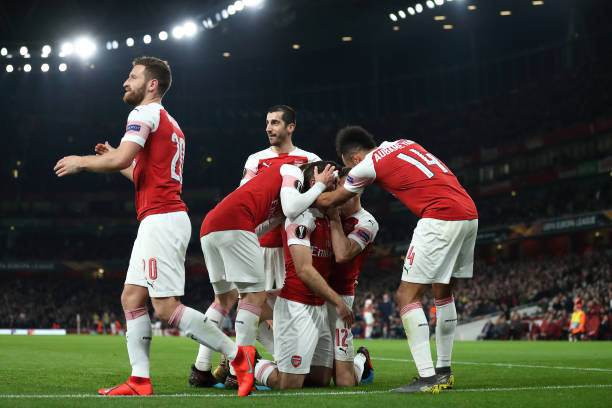 Arsenal has progressed to the UEFA Europa League round of 16 after beating Bate Borisov 3-1 on aggregate at the Emirates Stadium. The gunners came into this game while on pressure because they had lost the first leg of this encounter in Belarus.

Arsenal started off the match smoothly as Pierre-Emerick Aubameyang sent in a good cross which Volkov converted in ( own goal ) to give the gunners the much-needed quick lead in the fourth minute of the game. The gunners got more momentum to look for other goals but Bate Borisov still looked very sharp and good on counter attacks because Stephan Lichtsteiner even stopped a ball on the line to preserve the lead of the North Londoners.

Arsenal had full control of the game and were linking up well with each other in attack especially Mesut Ozil and Alex Iwobi, those two had an incredible performance throughout the whole 90 minutes. Arsenal’s second goal of the day came from a corner kick after Granit Xhaka sent the ball beautifully into the box and Shkodran Mustafi headed in to make it 2 nil in favour of Unai Emery’s men.

The first half started off on the same note as the first one and Arsenal’s Matteo Guendouzi almost made it three but his shot went a few inches wide but the gunners constantly kept pressing the visitors and doing great attacking moves involving Ozil, Iwobi and Mkhitaryan. Arsenal captain Laurent Koscielny started limping and was then replaced by Sokratis Papastathopoulos.

The Greek defender made instant impact as another Granit Xhaka corner found Sokratis whose first touch went into the back of the net to give the gunners confidence as they now led 3-1. Lucas Torreira later came in for Matteo Guendouzi who was having a great performance. Mkhitaryan was also replaced by Denis Suarez in the last minutes of the game.

So the Arsenal players, fans and coach will today go home with smiling faces as they have qualified to the next round of the UEFA Europa League round.

Arsenal defeat Southampton thanks to Lacazette and Mkhitaryan