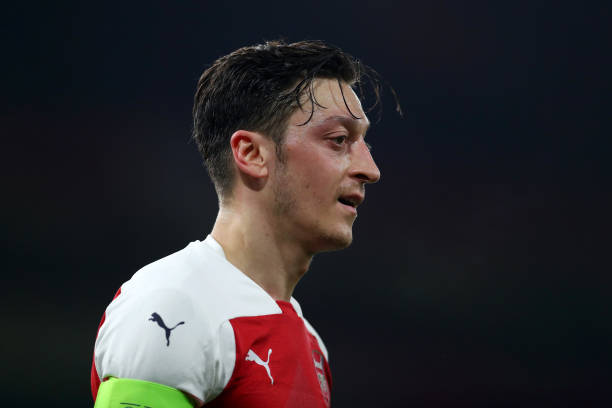 Mesut Ozil has been at Arsenal for five years but he has however this season been benched by Unai Emery in more than one occasion because the new gunners boss makes everyone fight for a spot in the starting eleven. Most of the Arsenal fans have however not welcomed this idea from Emery because they believe the German international has shown how he is a valuable player that should be playing in most matches.

Mesut Ozil has sometimes even been left out of the 18 man squad because Arsenal’s boss Unai Emery doesn’t trust him in away matches. Arsenal star Nacho Monreal has however heaped praise on Mesut Ozil and claims that the German international’s presence in matches helps them win because the opponents fear him because he is a reputable footballer who is known by everyone.

“He’s very important for us and he’s a top-quality player. He helps us a lot with assists and scoring goals.” Nacho Monreal told Arsenal.com.

“When the other teams see him on the pitch, they say, ‘Oh Mesut is here, we need to be careful’ so he’s an important player.”

Mesut Ozil has been very impressive for Arsenal ever since he joined the gunners in 2013 but his form has been poor in the last two years because he is getting old and some pundits claim that he has lost motivation to play at his maximum best because of the deal which he was given last year.

As Nacho Monreal’s statement sounds, you can clearly tell that the Arsenal players were on the side of Mesut Ozil during his scuffles with Unai Emery but it will however be interesting to see if the German star will survive the summer transfer window because, most reports say that he will be sold to reduce on the club’s wage bill.

Denis Suarez sends a clear message to the Arsenal fans