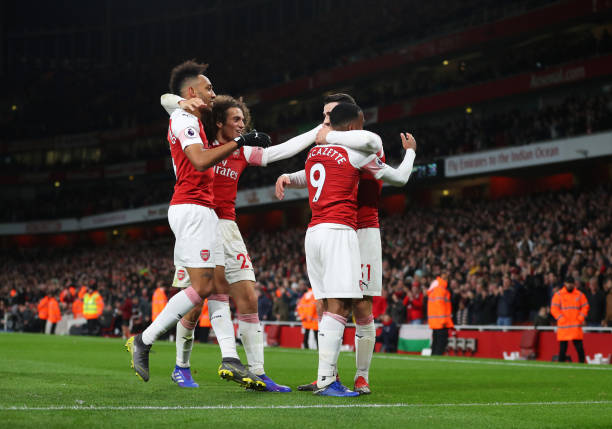 Arsenal has gone into the third position after successfully beating Newcastle United 2-0 thanks to goals from Aaron Ramsey and Alexandre Lacazette. The gunners started the match poorly because Newcastle United was not keeping the ball at the ground but they later settled into the game, and we started seeing the likes of Mesut Ozil, Iwobi and Lacazette try to make things happen.

Aaron Ramsey put the ball into the back of the net after a corner was sent into the penalty box but the goal was however disallowed because Sokratis had made a foul. The gunners continued putting pressure on Newcastle United and Aaron Ramsey finally went on the score sheet to give the gunners a much-needed lead.

The gunners looked to be in full control of the game in the first half because Newcastle United resulted into using long balls which didn’t work and Arsenal almost doubled their lead before halftime after Lacazette received a very fast cross and made a beautiful turn, and shot the ball towards the back of the net but it was however blocked. The first half ended 1-0 in favour of Arsenal who were quite dominant throughout the 45 minutes.

Newcastle United looked more organized in the second half and tried to look for an equalizer but the gunners remained stable at the back. Arsenal was however looking dangerous each time it attacked. Alex Iwobi was later replaced by Pierre-Emerick Aubameyang.

Arsenal still looked dominant but Newcastle United were still trying to put pressure on the defence of the home side, Arsenal later lost Aaron Ramsey to an injury and Mohamed Elneny came in his place. The Egyptian international looked great alongside Guendouzi and was sending some great balls to Aubameyang on the flanks.

We now went into the final 10 minutes of the game and the game became interesting as Lacazette linked up well with Aubameyang to double Arsenal’s lead, Aubameyang headed the ball into the path of Lacazette who chipped above the goalkeeper. Mkhitaryan then replaced Mesut Ozil who had an incredible performance. The gunners got a couple of chances including a disallowed goal in the last minutes of the game but the score line stayed at 2-0. So Arsenal goes into the third position on the Premier League table and Unai Emery will be happy with the performance of his team.

Arsenal wastes the chance to go third by losing to Everton