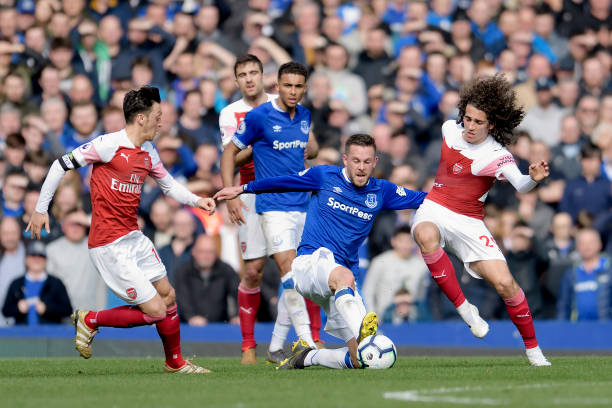 ( Everton Vs Arsenal / Photo via Getty )

Arsenal blew the chance to go into the third position on the Premier League table yesterday after they lost 1-0 to Everton at the Goodison Park. The gunners came into the match hoping to collect all the three points but were stunned by the commitment of the Everton side who looked more hungrier to get all the three points.

An early goal from Jagielka made the Arsenal players to play under pressure in the first half but they were however getting outplayed by Everton who resulted into using long balls to get past the midfield of the gunners. The partnership of Mohamed Elneny and Matteo Guendouzi failed to work as Unai Emery would have hoped because they failed to link the attack and defence resulting into Mesut Ozil getting a bit back to get the ball forward.

LIVERPOOL, ENGLAND – APRIL 07: Alexandre Lacazette of Arsenal battles with Seamus Coleman of Everton during the Premier League match between Everton and Arsenal at Goodison Park on April 7, 2019 in Liverpool, United Kingdom. (Photo by Simon Stacpoole/Offside/Getty Images)

Unai Emery decided to bring in Aaron Ramsey and Pierre-Emerick Aubameyang replacing Elneny and Kolasinac at the start of the second half, this did help the gunners to try and move forward as Ramsey looked more confident on the ball than, Elneny who had done a lot of back passes in the first half. Aaron Ramsey did get a chance to equalise for the gunners but he sent the ball above the bar.

Mkhitaryan also tried to dribble past the Everton defenders and made a stunning shot but it however went wide hence the score remaining 1-0 in favour of Everton who got more than four chances to double their lead in the second half but had poor finishing. Alex Iwobi later replaced Mesut Ozil and the Nigerian international did threaten on the flank and he even gave a wonderful through ball to Lacazette who failed to pass it into the box. So Unai Emery has returned to London with a sad face and will be hoping to forget this defeat and good that his players put on a great performance vs Napoli in the UEFA Europa League.