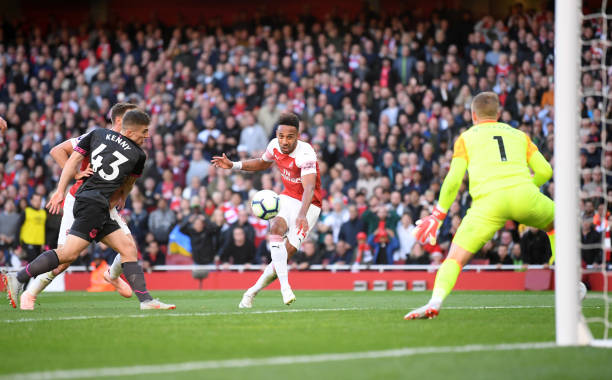 Aubameyang missed Arsenal’s match against Wolverhampton and the Arsenal fans want him to start their game vs Leicester City because they looked awful without him on Wednesday. Aubameyang is Arsenal’s top scorer this season and the gunners will definitely need him at this stage of the season since another loss will see them miss out on a top four finish.

Aubameyang will surely help the gunners on Sunday since his movements and speed was missed in their 3-1 loss against Wolverhampton but it is unclear if he will be paired with Lacazette. Aubameyang trained on Friday according to Unai Emery and the boss claims that he could start on Sunday if he also trains on Saturday.

“He trained today and, if he can train tomorrow, I think we can think he’s ready for Sunday. If he can train normally tomorrow, it’s a possibility.” Unai Emery told Arsenal Player.

Lacazette does not usually score away goals and so it’s definitely great to have Aubameyang back into the Arsenal squad ahead of a season defining match against Leicester City this weekend.

Emery: I want make Arsenal the best club in the world

Unai Emery reveals how they will recover their confidence